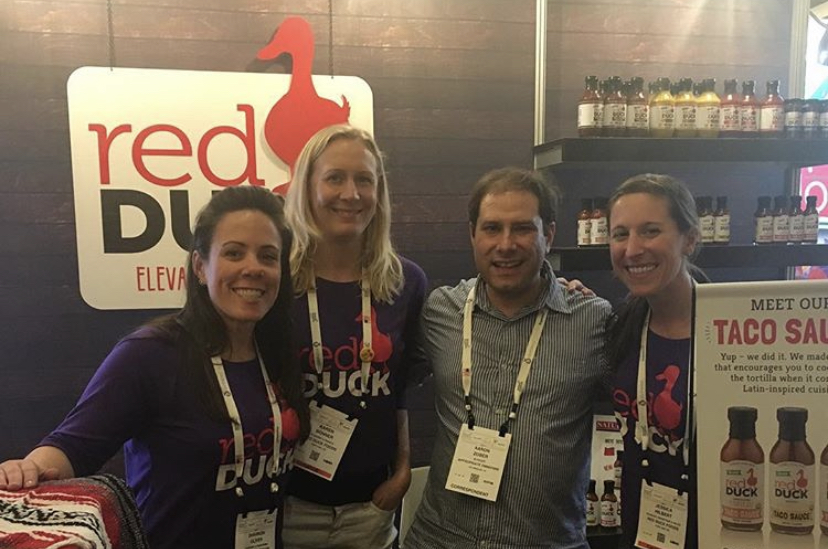 My coverage of National Sandwich Day continues. In earlier installments, I gave my recommendations for the best sourdough bread, lunch meats, and cheeses. Now it’s time to get into the best condiments as nobody wants their sandwich to be too dry.

Big ag condiments are some of the unhealthiest products out there. Almost every type of refined and denatured foods can be found in their ingredient lists. The major mayonnaises are the worst as they use factory farmed eggs, canola or soybean oil, and genetically modified sugar or high fructose corn syrup. The ketchups aren’t much better as they contain high fructose corn syrup and conventional tomatoes sprayed with multiple pesticides. Plus both mayo and ketchup, along with mustard and hot sauce, all use vinegar. If vinegar isn’t organic or non-GMO verified, there’s a strong possibly it’s sourced from genetically modified corn.

Fortunately, a number of natural product companies have stepped up to the plate in the last decade and introduced condiments made with simple and real ingredients. Some businesses originated as condiment producers while other natural food brands in outside areas felt it was time to delve into reinventing the classic condiments.

In alphabetical order, here are the 10 best condiments made with real ingredients: 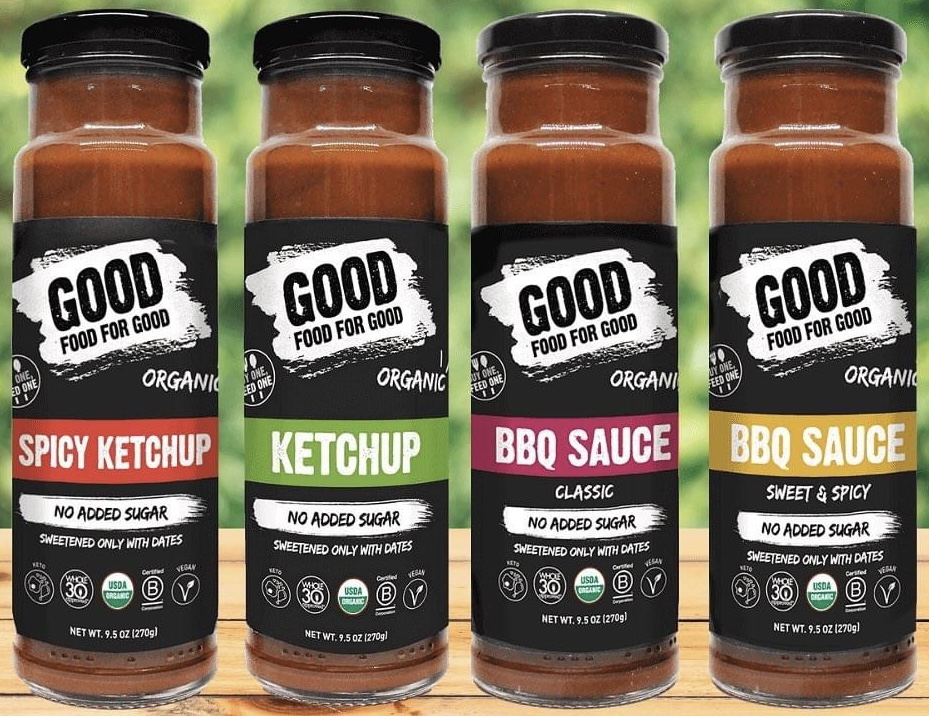 Good Food for Good founder Richa Gupta was born and raised in India, where she ate home cooked meals every night. As an adult, Richa found it hard to maintain eat healthy due to her busy schedule and the lack and convenient and nutritious options. After becoming a mother; she knew she needed to make a change not only in her life, but throughout the world. So Richa launched Good Food for Good.

Good Food for Good’s condiments are all sweetened with date paste. The options are regular and spicy ketchup and classic and sweet & spicy barbecue sauce. Their other products are cooking sauces and bolognese sauces. All of Good Food for Good’s sauces are USDA Certified Organic, Whole 30 approved, paleo, keto, and vegan. 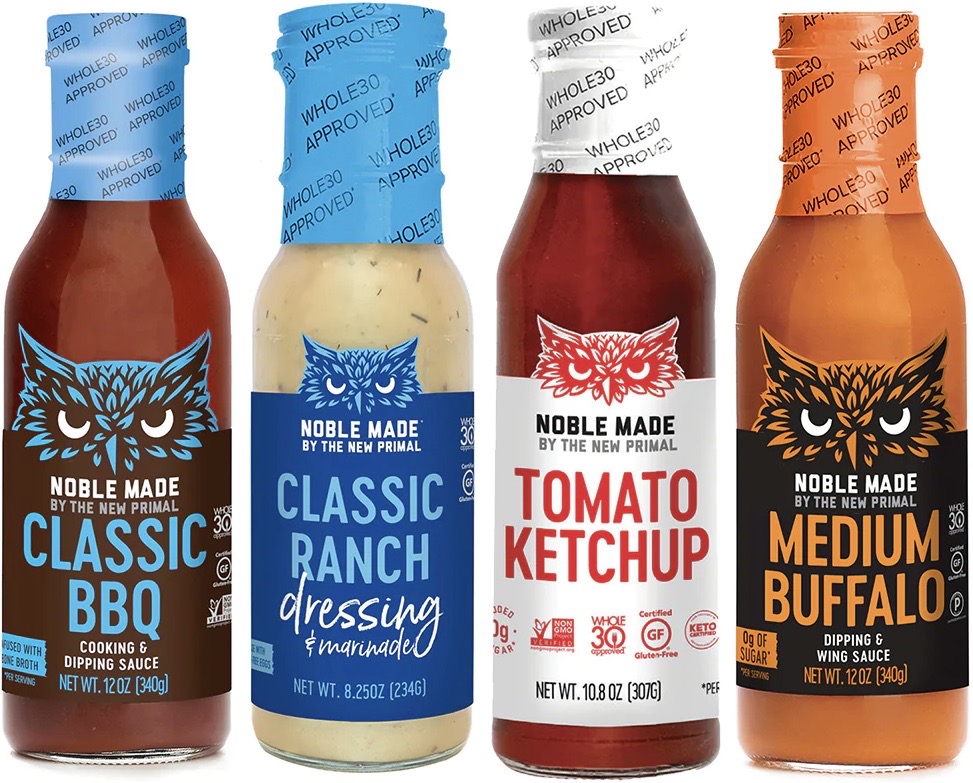 After graduating college and being concerned about the junk food in the vending machine at work, health conscious omnivore Jason Burke started making his own beef jerky to keep in his desk drawer. His jerky used grass fed beef, simple spices, and a dehydrator in his kitchen. His co-workers soon saw and smelled his wonderful creations. He concocted a variety of flavors which resulted in multiple orders from people. This planted the seeds for The New Primal to debut in 2012.

The New Primal has since expanded from jerky and beef sticks and ventured into the condiments world to appeal to vegetarians.  They make ketchups using only fruits for sweeteners. This includes a regular ketchup and a carrot ketchup for those avoiding nightshades. The New Primal has a dijon mustard produced without white wine. And being from the south, they of course have barbecue sauces using all real ingredients. Their barbecue sauce flavors are a classic made with grass fed bone broth, smoky, and a mustard barbecue. In their home state of South Carolina, mustard barbecue is the only way to do barbecue sauce. Additionally, they have buffalo sauces available in mild, medium, and hot. All of their condiments are Whole 30 approved. 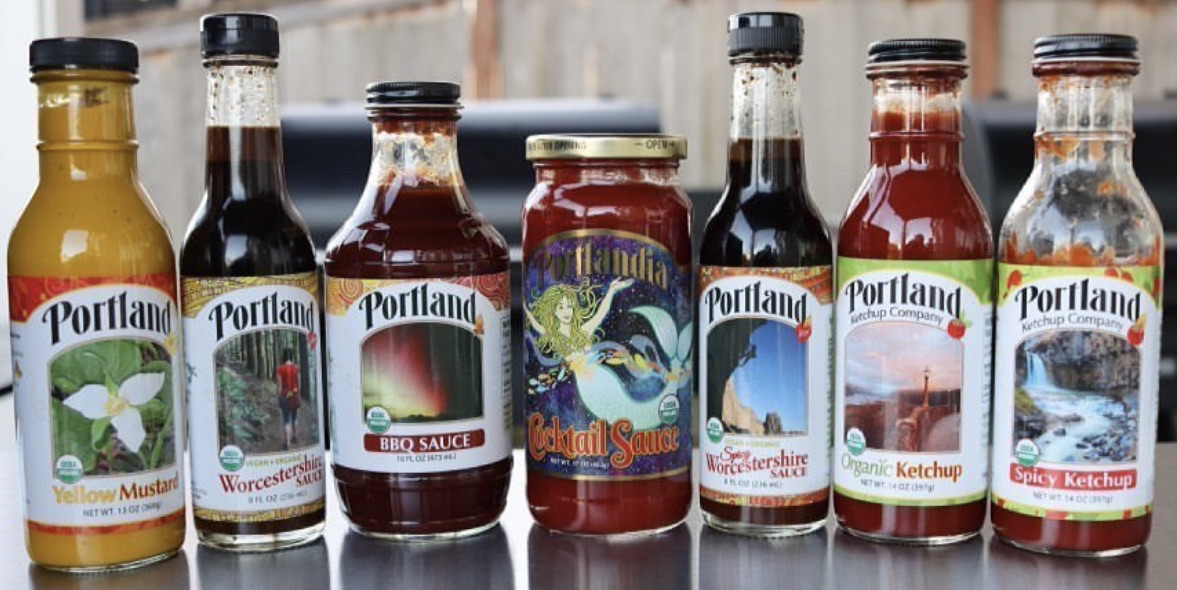 In 2010, Jeff Bergadine and Michael Deal felt it was time to change the way people thought about condiments. Their plan was to create condiments which were healthier and more sustainable, but also affordable and available to everybody.  They began their journey by creating a ketchup which contained less sugar and salt, but had a bold and savory flavor.

After the success of their organic ketchup, Portlandia Foods introduced an organic mustard two years later. Today, their line of condiments also includes barbecue, Worcestershire, and cocktail sauces. All of their products are USDA Certified Organic and Oregon Tilth Certified Organic. 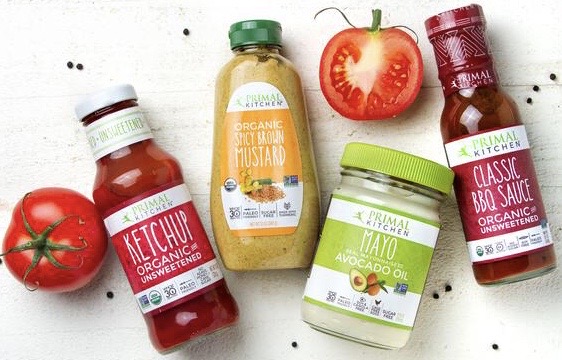 Mark Sisson became one of the first ancestral health bloggers back in 2006 with Mark’s Daily Apple. He started writing it as a way for people to take full control of their health and to investigate, discuss, and be critical thinkers of everything we’ve thought was true about health and wellness. After a huge success in the blogosphere, Sisson set foot in the natural food world with offerings that didn’t have any dairy, gluten, grains, refined sugar, or soy. Primal Kitchen was born in 2015.

Primal Kitchen’s first product was a mayonnaise made with avocado oil instead canola oil. They also have mayos in garlic aioli and chipotle lime flavors. They produce cleaner versions of other condiments, such as ketchup free of any sweeteners, and a spicy brown mustard to pair it with. Primal Kitchen also has a wide selection of sauces, which are barbecue, buffalo, soy free teriyaki, steak, tartar, cocktail, and special sauce. Each of their condiments are certified Paleo, Whole 30, and Non-GMO. 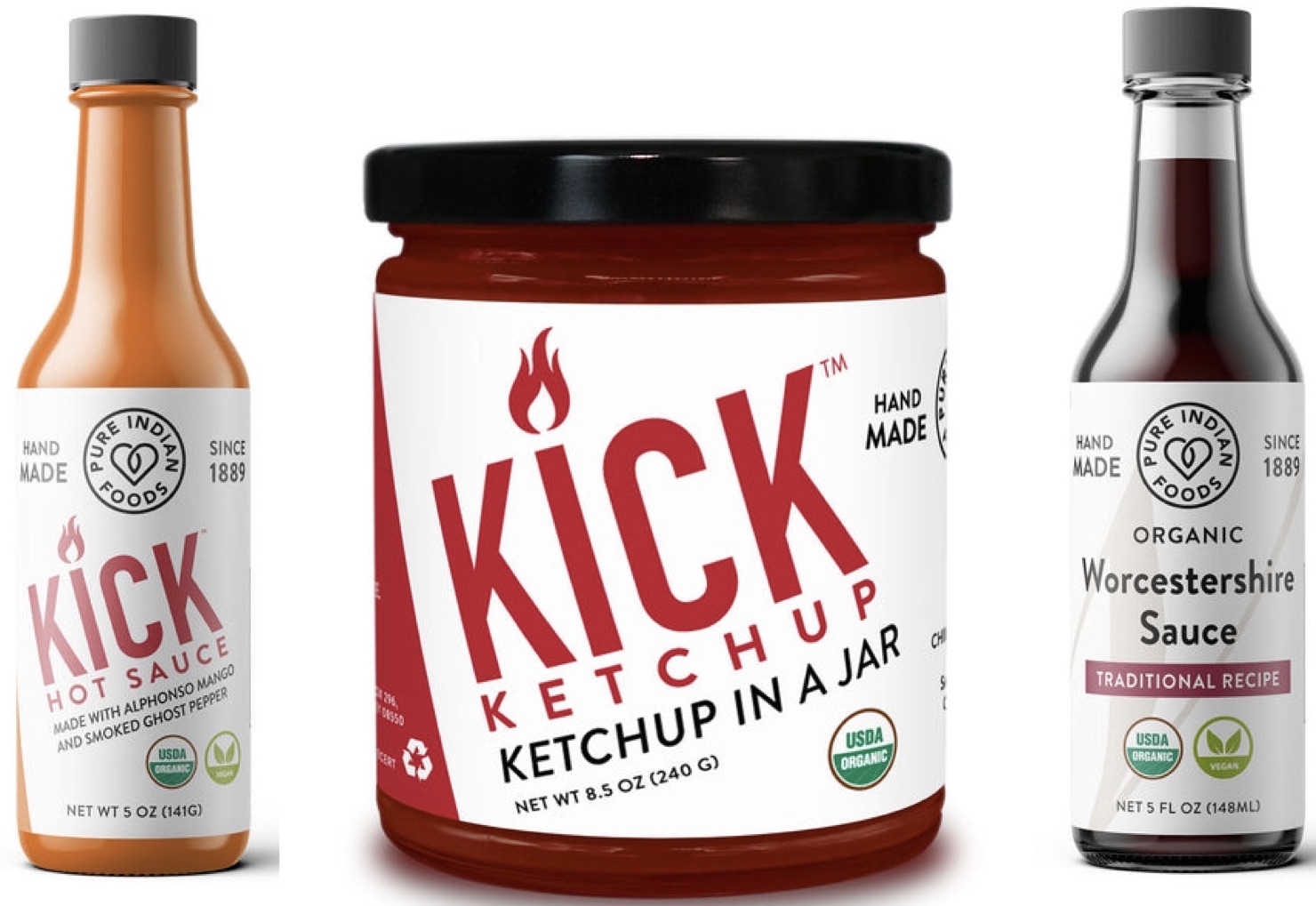 In 2008, husband and wife Sandeep and Nalini Agarwal brought the family ghee business to the United States under the name Pure Indian Foods. Sandeep’s family had been in the ghee business in northern India since 1889 starting with his great great grandfather Lala Khoobram Agarwal. Sandeep previously worked a hi-tech job on Wall Street for many years. Feeling unsatisfied with his work, he turned to the family tradition of ghee making.

After finding success with organic ghee, Sandeep expanded more and more, leading to the vast line of organic products which Pure Indian Foods carries today. Some of their other lines of food are Indian herbs and spices, teas, oils, grains, nuts, and seeds. Condiments is the most recent addition of Pure Indian Foods with their spicy ketchup, ghost pepper hot sauce, Worcestershire sauce, madras curry, and chutneys.

Red Duck‘s origins date back to when its founders Jessica Hilbert, Shannon Oliver, and Karen Bonner were in grad school working together on a class assignment. Their idea was to create excitement in the condiments aisle as they felt there wasn’t any there. Back then they never expected that their curiosity and spirit would bring them to where they are today as a business.

Presently, Red Duck has a great line of condiments using only simple ingredients. For their ketchup, they allow the tomatoes to be ripened on the vine and picked when they’re red. The tomatoes are then pureed in less than four hours after they’re picked from the fields. All of their ketchups are lower in sugar than the conventional brands and some organic ones. Red Duck even has a smoky ketchup which uses date paste in place of sugar. Their barbecue sauces leave out any color additives, heavily refined ingredients, or other hard to read words. They also make cocktail and taco sauces. Red Duck is a Certified B Corporation with all of its products being USDA Organic. 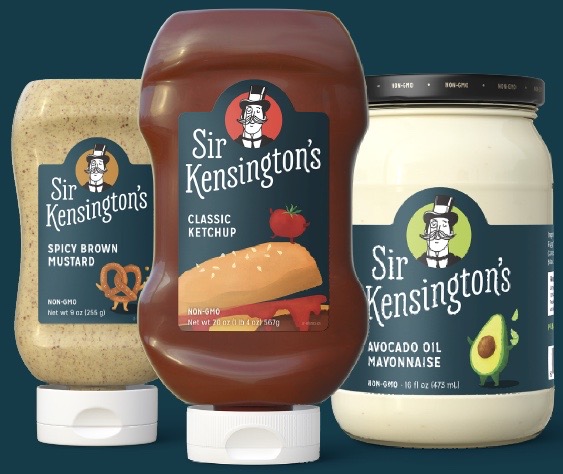 Sir Kensington’s beginnings are another story of college friends with a bold idea. Co-founders Scott Norton and Mark Ramadan were attending Brown University when they noticed many foods had evolved to be more natural and healthier. Yet they still saw condiments lack of condiments in using better ingredients. Norton and Ramadan first devised a ketchup with clean ingredients such as whole tomatoes and less sugar.

After Sir Kensington’s achieved popularity with its ketchup, Norton and Ramadan began reinventing other condiments they felt could be better. They introduced a mayo made with Certified Humane free range eggs and sunflower oil. They now have six types of mayo, which are original, organic, avocado oil, chipotle, sriracha, and special sauce. Sir Kensington has four mustards in the varieties of yellow, spicy brown, dijon, and honey mustard. Lastly they offer a series of sauces called everything sauces, which come in the flavors of chile lime crema, curry masala, garlic, and gochujang. Every ingredient in their condiments are Non-GMO Project Verified. 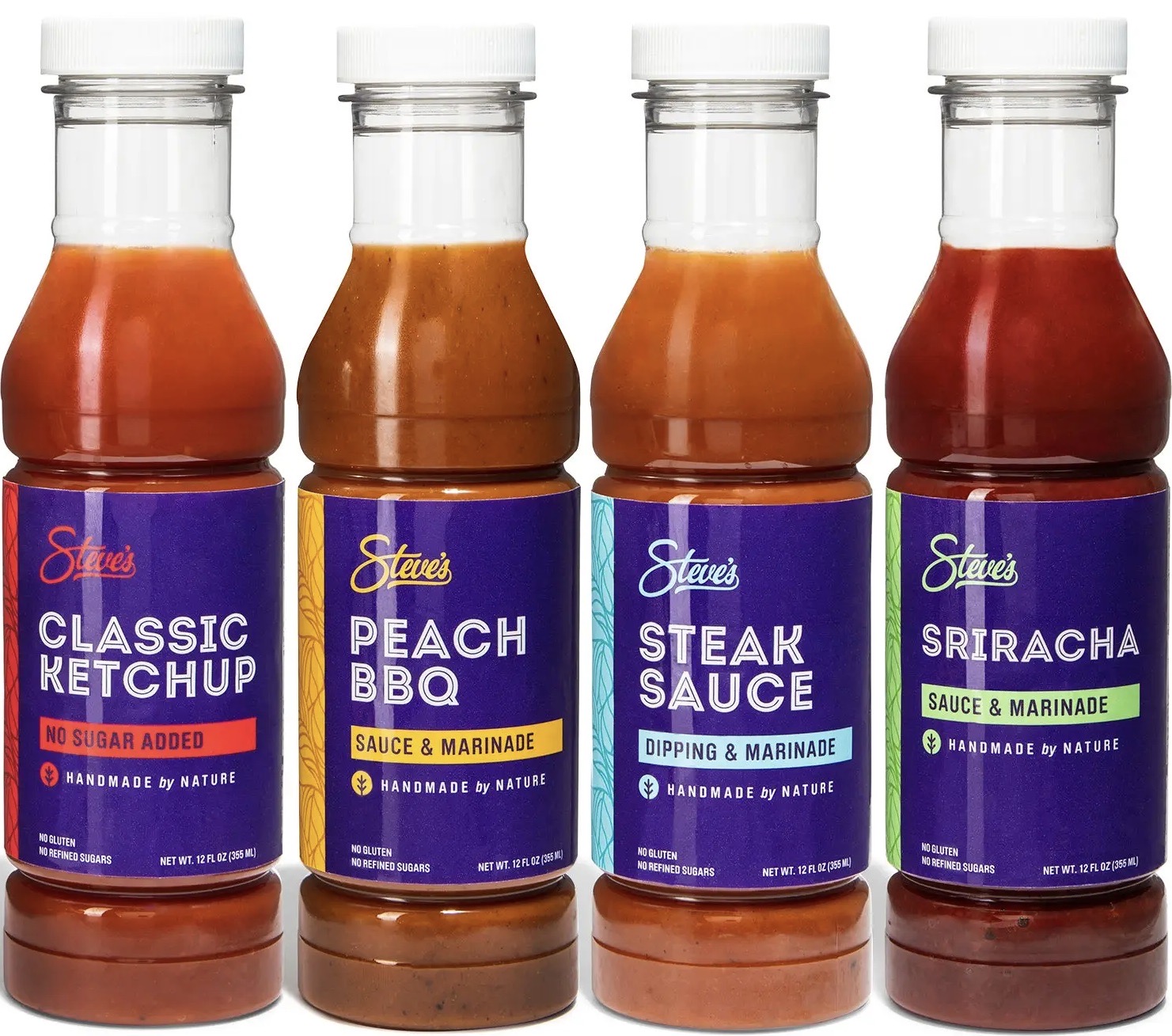 In 2007, Steve Liberati was working for his father’s extermination business when he decided to follow his true passion of nutrition and fitness. So he began training teens in a local park and providing nutritious lunches consisting of jerky, nuts, and berries for them to eat at school. This was the genesis of the Steve’s flagship product known as the PaleoKit, which was soon sold online. The company began quickly expanding and in seven years had a total of 60 products.

Condiments currently make up a decent portion of what Steve’s PaleoGoods sells. They have a ketchup which uses honey and bananas for sweetening. The other condiments are maple mustard, and steak, wing, and sriracha sauces. All of Steve’s condiments are free of any refined sugars. 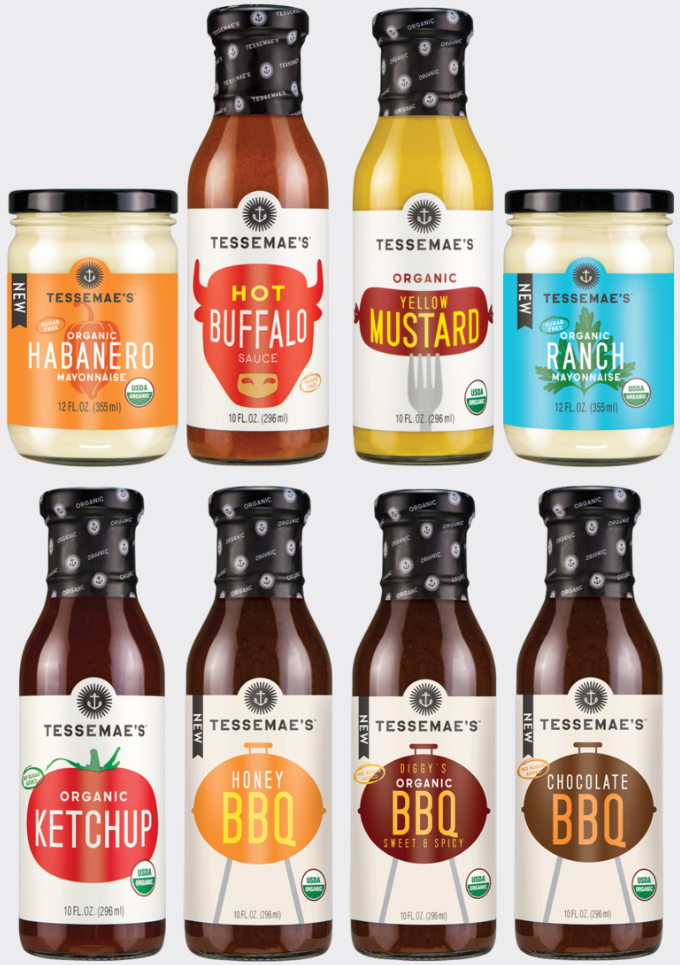 Tesse Vetter was raising three athletic sons and trying to find a way to get them to eat all of their vegetables. As she wouldn’t serve them any of the conventional dressings filled with artificial ingredients, she insead decided to make and perfect a lemon garlic salad dressing for her kids. Her oldest son Greg loved the dressing so much that he founded Tessemae’s to sell his mother’s dressing.

Following the success of the dressing, Tessemae’s came up with other dressings plus extending into marinades, toppings, and condiments. Their mayos, which consist of the flavors regular, ranch, and habanero, all contain sunflower oil and cage free eggs. Tessemae has a ketchup sweetened only with dates. Their barbecue sauces come in the assortment of regular, sweet and spicy, honey, and chocolate. They’ve got yellow, dijon, and honey mustard. And they have a regular and ranch buffalo sauce. Certain products of theirs are USDA Organic, Whole 30 Approved, and/or Keto Diet Approved. 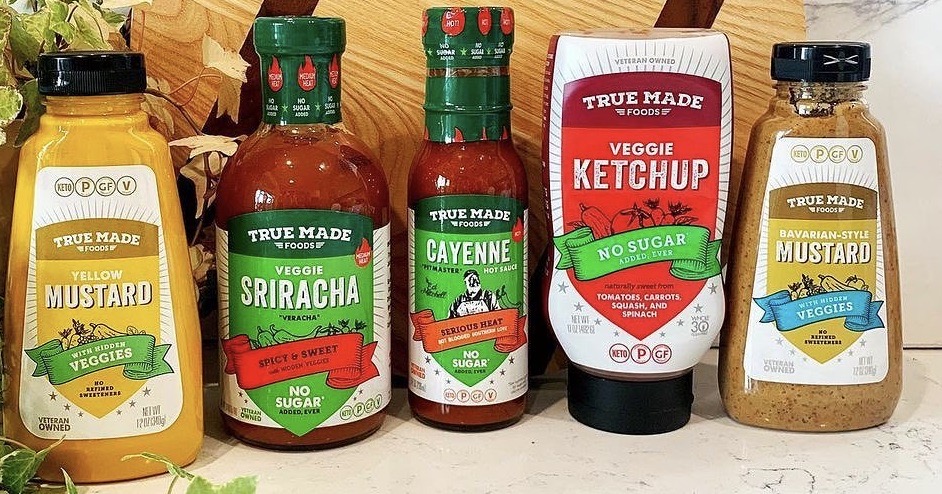 Health conscious True Made Foods founder Abe Kamarck tried to limit the ketchup consumption. He felt there was an opportunity to develop a better ketchup and he did. Abe then introduced better a barbecue and sriracha sauce as those were also popular at family cookouts.

The ketchups, mustards, sriracha, and sauces by True Made Foods have vegetables hidden in them plus fruits like apple to sweeten them. Their ketchups come in both low sugar and no sugar. Their barbecue sauces are done in the regional styles of Kansas City, E. Carolina Gold, Carolina Red, and East Carolina. They offer up the mustard varieties in the options of yellow, honey, and Bavarian. Each of the ingredients in their condiments are non-GMO. Their products are all either certified Paleo or certified Paleo Friendly by the Paleo Foundation. Its founder and CEO Abe served eight years as a Navy Helicopter Pilot before his current venture.