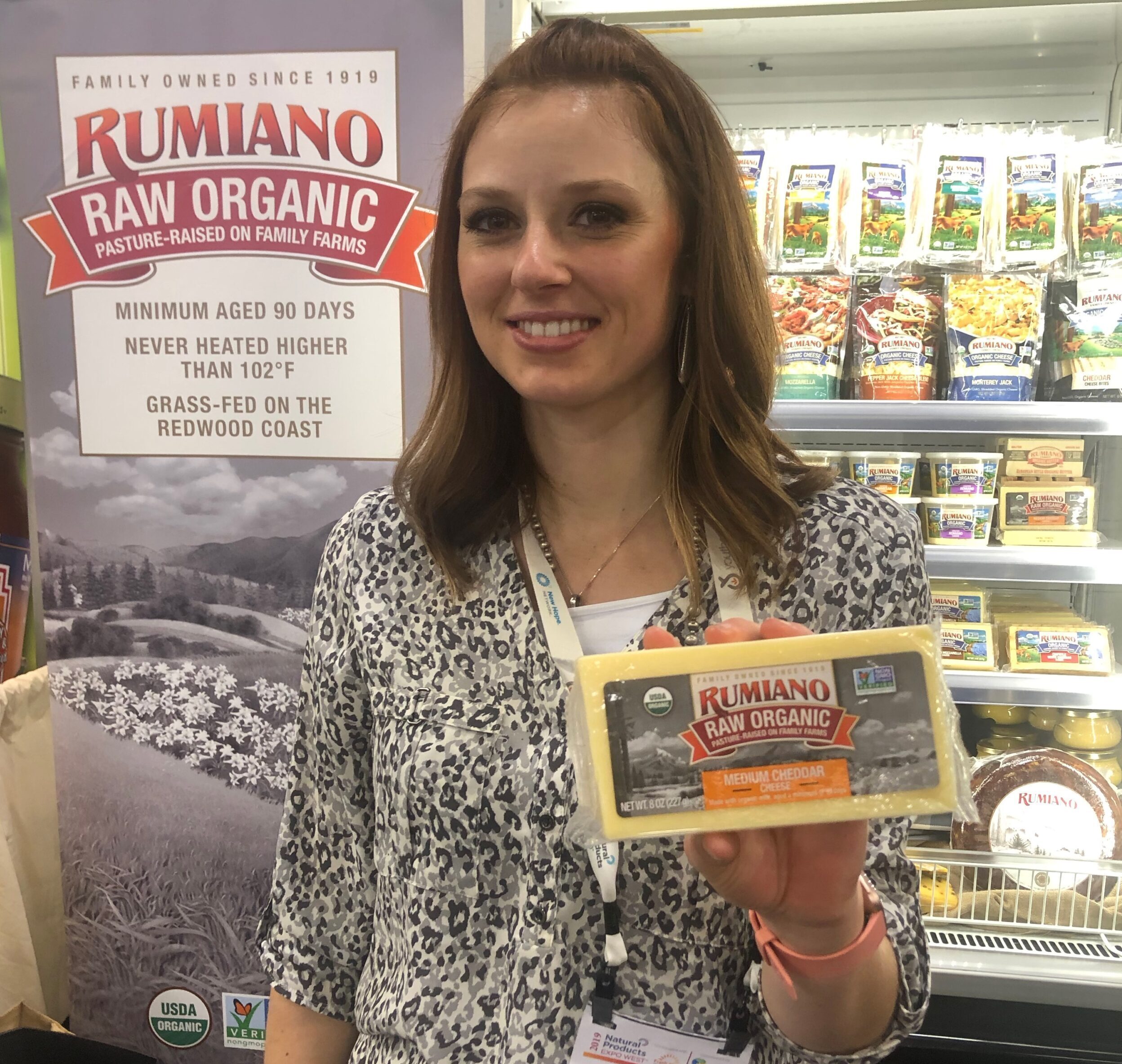 My coverage of November 3 as National Sandwich Day continues. Now that I’ve given my recommendations for bread and for meat, I get into the cheeses to place in middle of the sandwiches.

Like meat, it’s important to source cheeses from grass fed cows. Conventional dairy comes from cows which raised in feedlots and fed corn, soy, and wheat for a good portion of their lives. The feed is often genetically modified and sprayed with harsh pesticides. These cows were also likely given hormones and antibiotics. Grass fed dairy has cows roaming on opens pastures and being able to eat grass as their main source of food.

In alphabetical order, here are the 10 best grass fed cheeses: 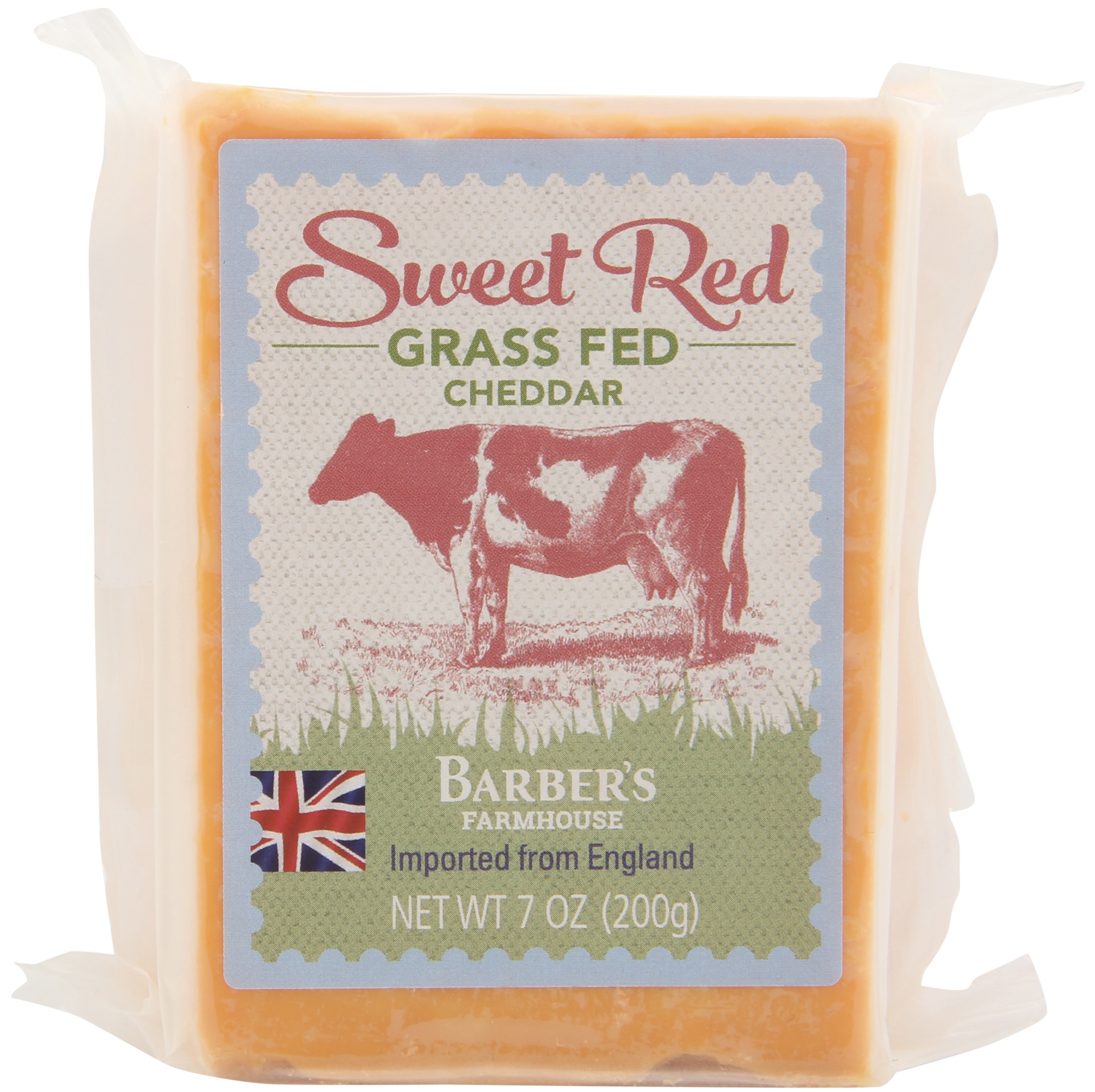 The Barber family is the oldest family in the world to still be making cheese. It all began with Daniel Barber producing cheese on his Somerset farm. Their cows today graze the lush pastures of Somerset and Dorset, which results in the cows providing a rich, creamy milk which is then turned into cheddar cheese. Barber’s Farmhouse  begins their cheesemaking process by using a traditional cheese starter culture whereas today many cheese companies use freeze dried cultures in packets. Barber’s also supplies its cultures to other cheesemakers.  The types of cheddar they offer are red, mellow, and cheddar aged 12, 18, and 24 months. 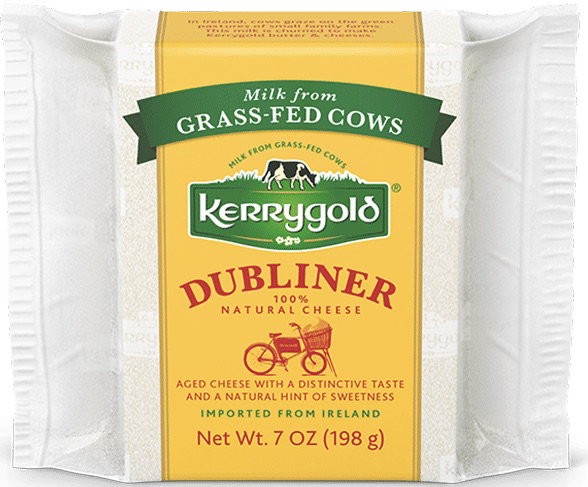 99% of farms in Ireland are family owned. Kerrygold  is a co-op 14,000 family farmers. As a co-op, Kerrygold has its farmers in its best interest. They guarantee that the farmers are paid a fair wage. Being a dairy farm in Ireland, they’re the only country with a system with standards as high as their Sustainable Dairy Assurance Scheme (SDAS). The SDAS determines the standards for animal health and welfare, hygiene, land management, water usage biosecurity, and greenhouse gas emissions. All of the farms who participate in the program have their standards measured and are provided ways of improving their practices. Kerrygold’s cows graze on grass all day long for a large portion of the year. Grass makes up the majority of their cow’s diet along with a small amount supplementary feed for their health. Their cheeses come in many flavors, including a number with names based on locations in Ireland, such as Dubliner, Skellig, and Blarney Castle. 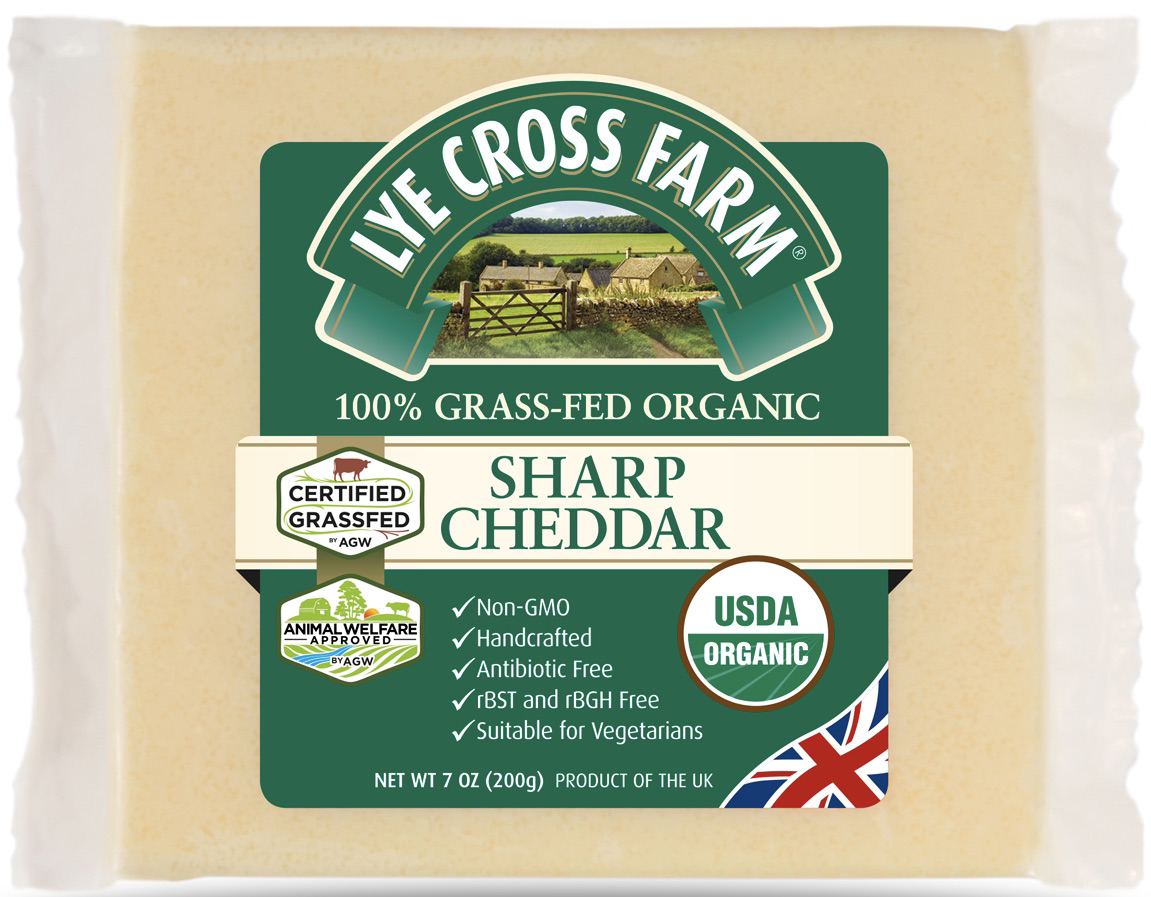 The Alvis family has been farming in Somerset, England for over 100 years. They’ve been making their Farmhouse Cheddar at the Lye Cross Farm since 1952. Their herd grazes freely in the fields below the Mendip Hills throughout the summer and are housed in the winter for warmth. Their animals are raised following the Five Freedoms of the English and Welsh charity The Royal Society for the Prevention of Cruelty to Animals. Those are freedom from hunger and thirst, freedom from discomfort, freedom from pain, injury or disease, freedom to express normal behaviour, and freedom from fear and distress. Lye Cross is working on reducing its carbon footprint by using a heat recovery system to mature its cheese, using solar energy to cool the cheese. The heat recovery system is also used to draw out excess warmth from the warehouse and naturally heat the water used to clean the cheese dairy. Cheddar is Lye Cross’s specialty with all of it cheeses. All of their cheeses are organic with two of their cheeses having A Greener World certification of being 100% grass fed and animal welfare approved. 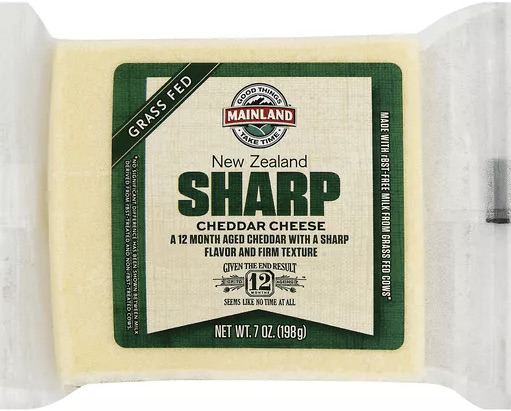 Mainland‘s story begins in 1954 with food technologist and Peter McConnon setting up a two-year contract to supply Auckland Food Products with South Island cheese from Otago, New Zealand. A year later, the Mainland brand was officially registered. In 1965, they introduced their vintage cheddar which aged up to 24 months. Then in 1966, they were able to get their own farm located in Dunedin. They added many specialty cheese varieties in 1999 with the Mainland Specialty Reserve. Their current cheese range in terms of all type flavors and everything from fresh, aged, soft, semi-soft, and artisan. 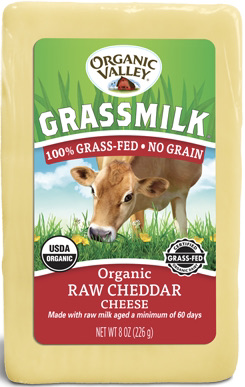 In 1988, seven Wisconsin farmers in the Coulee region were fed up with industrial chemical farming taking over the American agriculture system. They created a cooperative of family farms known as CROPP (Coulee Region Organic Produce Pool). The coop later became Organic Valley, specializing in organic dairy. In 1996, they moved into the meat industry. They were the first in the industry to ban animal by-products from a cow’s diet. Today, they’re a cooperative of over 2,000 farms in 34 states plus Canada and Australia. Their cows are on pasture 50% more than the USDA requirement. Three of their cooperative members are working a program called Climate-Smart Farming. Their goal is to raise the bar for carbon sequestration and greenhouse gas emissions and achieving carbon neutrality or hopefully a carbon-positive position. All of their Organic Valley’s cheeses are certified organic. They have a regular and sharp raw cheddar which come from cows with a 100% grass fed diet. Additionally, they have a wide selection of different flavors in their pasture raised cheeses. 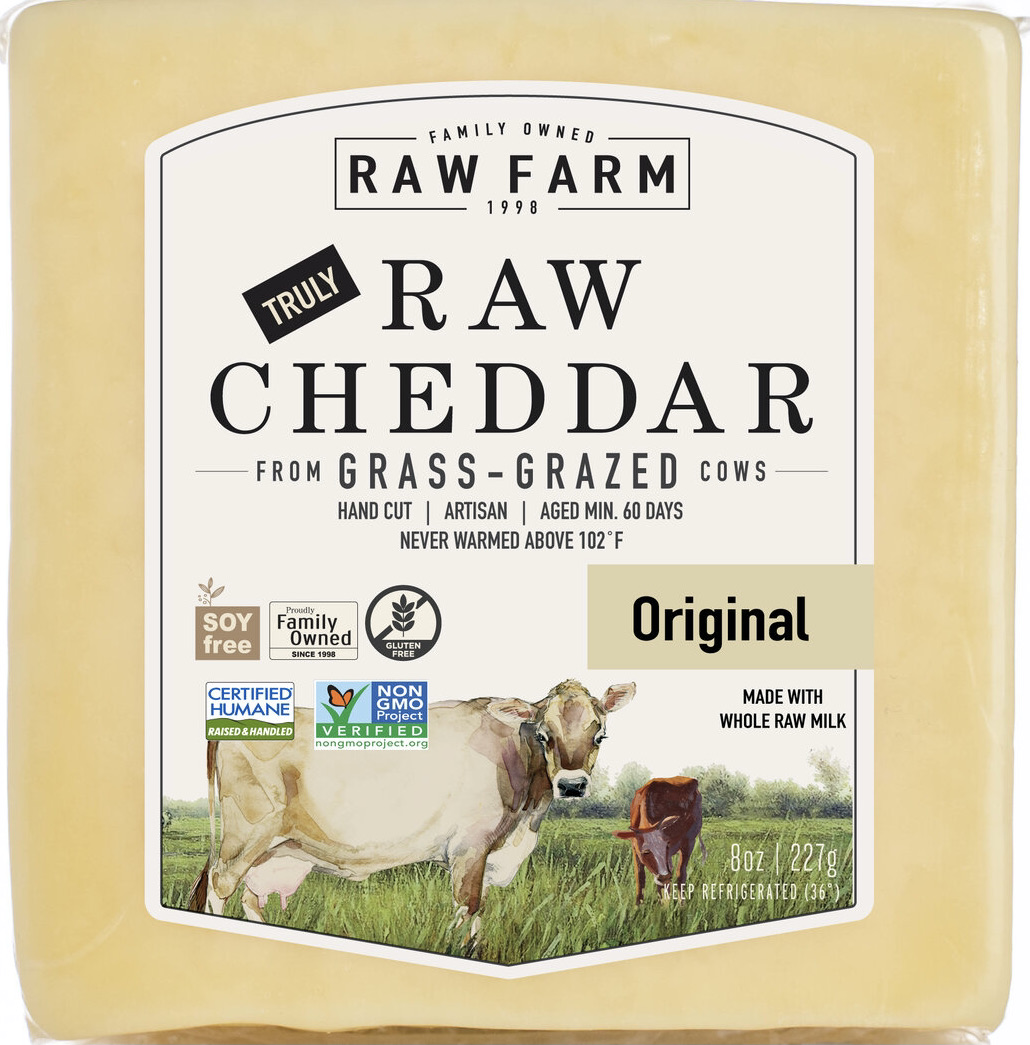 Raw Farm started in 1998 as Organic Pastures in Fresno, CA . Founder Mark McAfee discovered soon after opening the operations that the largest raw dairy in the world had folded. People began showing up at his ranch wanting milk which was raw and unpasteurized. Coming from working as a paramedic, Mark researched the principles of raw milk and was able to see the benefits in it. He learned that the deaths from raw milk were due to the milk becoming bad 120 years ago as the cows were raised in extremely unsanitary conditions. Milk started to be pasteurized instead of the farmers cleaning up their dairy farms. To properly remove dairy from pasteurization meant also removing the cattle from confined feedlots to open pastures to graze on as opposed to a diet consisting mainly of grain. They also needed access to clean water and sunshine and no hormones or antibiotics. Another important element of raw dairy is pathogenic testing to show that the cows are healthy. Raw milk contains beneficial bacteria not present when milk is pasteurized. Many people diagnosed with lactose intolerance are able to digest raw milk. Cheese is unfortunately the only raw dairy product which can sold legally across state lines. In 2017, Raw Farm began offering their cheddar nationwide. In 2020, they added a jalapeno flavored raw cheddar.

Fred, John, and Richard Rumiano were American immigrants from Italy in the early 1900s. They first worked in goldmines, shipyards, and liquor before settling near Willows, CA and starting a dairy operation in 1919. Italian hard cheese wasn’t available anymore after World War I, so they created their Monterey dry jack to serve the San Francisco and regional markets. Over the years, the Rumiano Cheese Company expanded into more factories for manufacturing and packaging, launched into new markets all over the U.S. plus Europe, and Asia, and had its leadership passed down from one generation of the Rumiano family to another. In 2005, they became the first plant on the west coast to produce organic cheese at scale. Then in 2019, Rumiano Cheese introduced an organic raw cheddar which is never heated more than 102° F and aged a minimum of 90 days. Today they have a wide range of flavors from the popular Rumiano Family Organics to the bold Rumiano Redwood Coast lines. 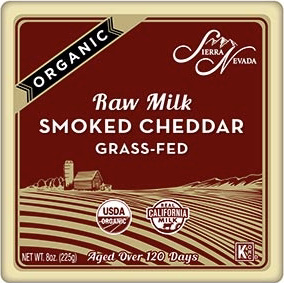 Sierra Nevada Cheese Company handcrafts organic dairy using milk which is free of hormones and antibiotics and comes from local farmers in Northern California.  Ben Gregersen and John Dundon introduced the company in 1997 by selling the cheeses at local farmers markets. As more people were demanding the products, Sierra Nevada was able to expand into local stores. In 2003, the company had grown and they felt it was time to relocate the creamery from Sacramento to 100 miles north in Willows, CA. They pride themselves for still sourcing clean ingredients and making their cheese with traditional manufacturing methods. A number of their cheeses use raw dairy with the options of fresh raw milk, 60 days aged, and 120 days and can be found in both cow milk and goat milk. Their other lines included organic and cow and goat milk in a diverse bunch of flavors. 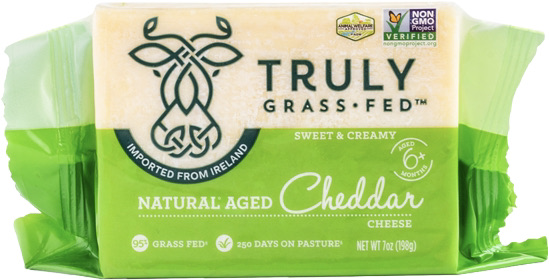 The dairy for Truly Grass Fed comes from over 3,000 farms located across Ireland. Every farm has an average of one cow per two acres. The farms are all Certified Animal Welfare Approved by A Greener World. This independent nonprofit certification program guarantees that the animals are raised outdoors on pastures for their entire lives on farms using sustainable methods. Truly Grass Fed’s cows are able to enjoy and graze on the luscious acres of green pastures for the majority of the year. When it becomes colder in the winter and the grass’ growth slows down, the cows move inside. Indoors, the cattle are provided with grass silage collected from the fields during the summer plus a small amount of concentrates for extra nutrition. Grass makes up 95% of the cow’s diet. The grass on the farms doesn’t require any mechanical irrigation as it’s watered by the bountiful amount of rain which Ireland gets. This also helps the farmers cut down on energy costs. Their grass growth rate exceeds the European average by more than a third. To keep their soil fresh, Truly Grass Fed encourages their ranchers to test their soils every three to five years, add the proper nutrients, and reseed when necessary to replenish the grasses. Their offerings of cheeses come in regular and sharp natural aged cheddar. 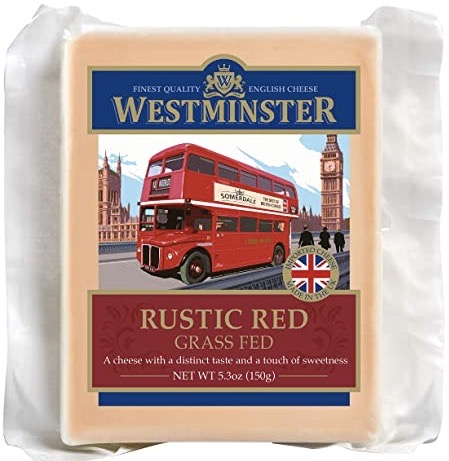 Westminster is a brand of cheese launched in the United States in 2010 to provide cheese which originated from cows roaming and grazing on rich, lush pastures in Somerset and Cheshire. The cheese is made by hand and graded three times before the selection. Westminster’s types of cheddars are rustic red, smoked, 12 month aged sharp, 18 month aged vintage, and 2 years aged farmer’s reserve.