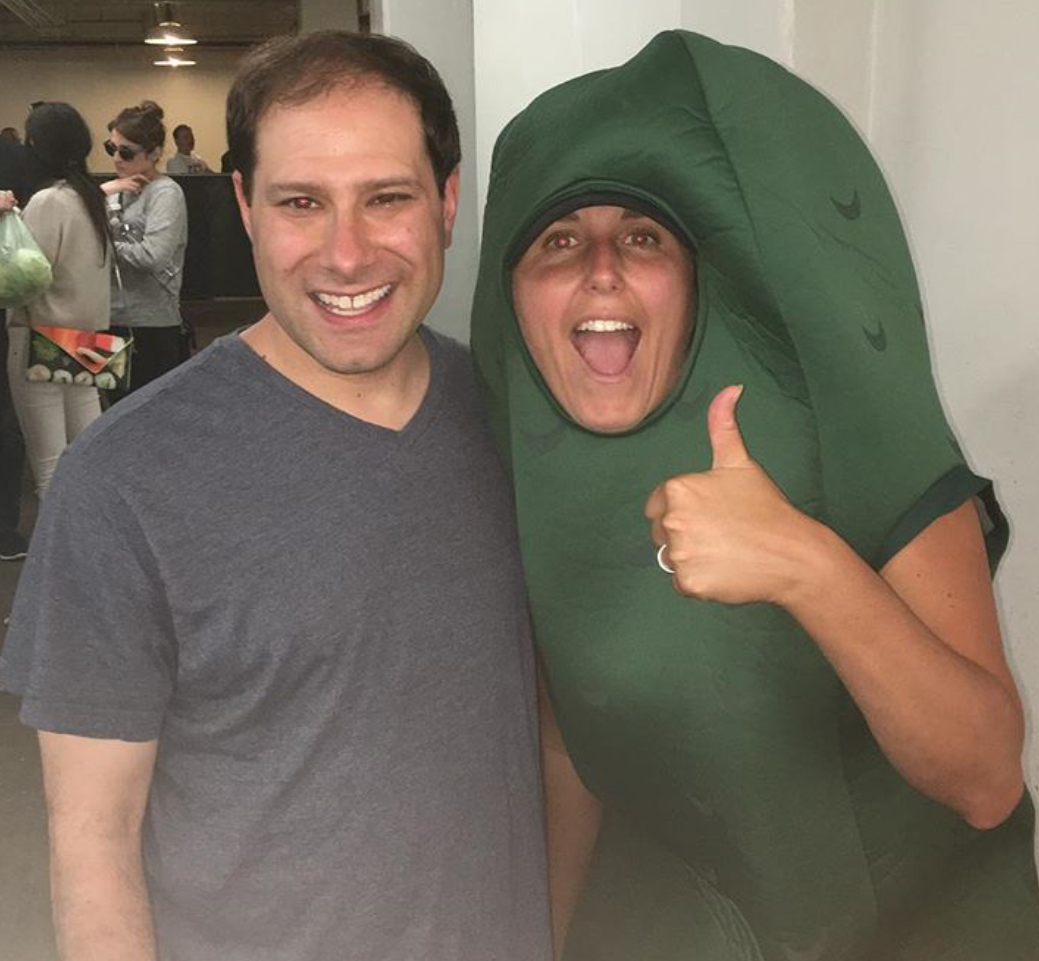 November 14 is celebrated as National Pickle Day. This day was first observed by the Pickle Packers International back in 1949 to observe the pickle as one of the most popular fermented foods.  I’m pleased to be taking part in this day devoted to everything about the pickles as it’s the first food I remember falling in love with. Little did I know that this was also my introduction to traditionally fermented real food.

Growing up in Cleveland, there was a great local pickle company Don Hermann’s, which made true kosher dill pickles with salt and water to pickle the cucumbers. They also didn’t use any vinegar. Like my family, these pickle makers were a Jewish family with Hungarian ancestry. So I was raised knowing what good old Jewish deli pickles tasted like.

When I went off to a college in a small town in upstate New York, I was unable to find Don Hermann’s or any raw fermented pickles. The only ones I saw in grocery stores were ones made with vinegar. At the time, it was the taste I missed from real kosher pickles. Later I learned lacto-fermented pickles also have way more health benefits than vinegar based ones. Raw fermented pickles are filled with probiotics, which are great for your gut. On the other hand, pickles using pasteurized vinegar lack any living cultures. This means your digestive system won’t reap any rewards from vinegar based pickles. Plus if vinegar isn’t organic or non-GMO certified, then it’s often processed from genetically modified corn.

I now love and consume kosher dills pickles for many reasons: a connection to my Jewish culture, the health aspects of fermentation, and of course their out of this world flavor. Real pickles are one of the harder ferments to find, but I’ve been able to locate some food producers keeping the tradition of kosher dill pickles alive. Literally alive as they’re raw. You could say the producers wanted to bring back their culture. Many of their reasons for individuals making truly fermented kosher dill pickles is to provide consumers like myself access to them. Others do it for the health advantages of fermented foods and to support local, and organic farmers, all of which I’m also a big proponent of. 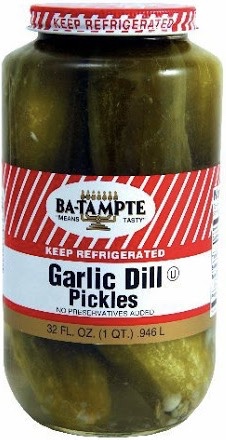 Ba-Tampte is one of the few companies which makes New York style pickles and is still based in New York. Having been around since 1955, they also have stayed family owned. Founder Meyer Silberstein’s father and grandfather ran pickle stands and pushcarts in the Lower East Side of Manhattan. The business is currently run by Meyer’s sons and grandsons, following many of the pickle recipes which have lasted in the family for generations. While now using an automated pickle packing process, the final touches remain done by hand. Ba-Tampte’s pickles come in the flavors of garlic dill and half sour. 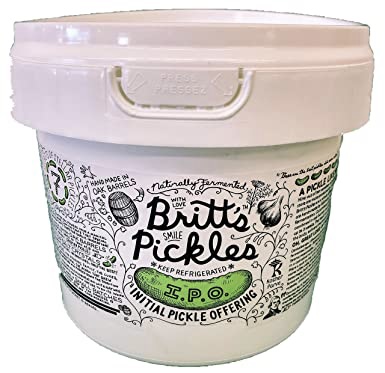 Britt Eustis discovered fermented foods several decades ago when he visited Japan and toured the facilities of a centuries-old miso company. He then began experimenting with fermented foods once he returned home. Britt also worked in the food industry on the brokerage side as president and CEO of Ceres Organic Harvest in St. Paul, Minnesota. In 2011 after 40 years, his division was eliminated. So he moved to Seattle to work with his artist sister. A year later, Britt began his own pickle company, Britt’s Fermented Foods, and got them sold at farmers markets, a stand at the Pike Place Market, and regional stores. Britt sees his pickles as unique because they’re fermented in oak barrels. Oak barrels were an ancient tradition for lacto acid fermentation, but the use of the barrels were phased out in the 70s with changes in food safety regulation laws as well companies expanding in size. Britt’s now produces other ferments, such as sauerkraut and kimchi. For the pickles, their choices are full sour, spicy, or horseradish. 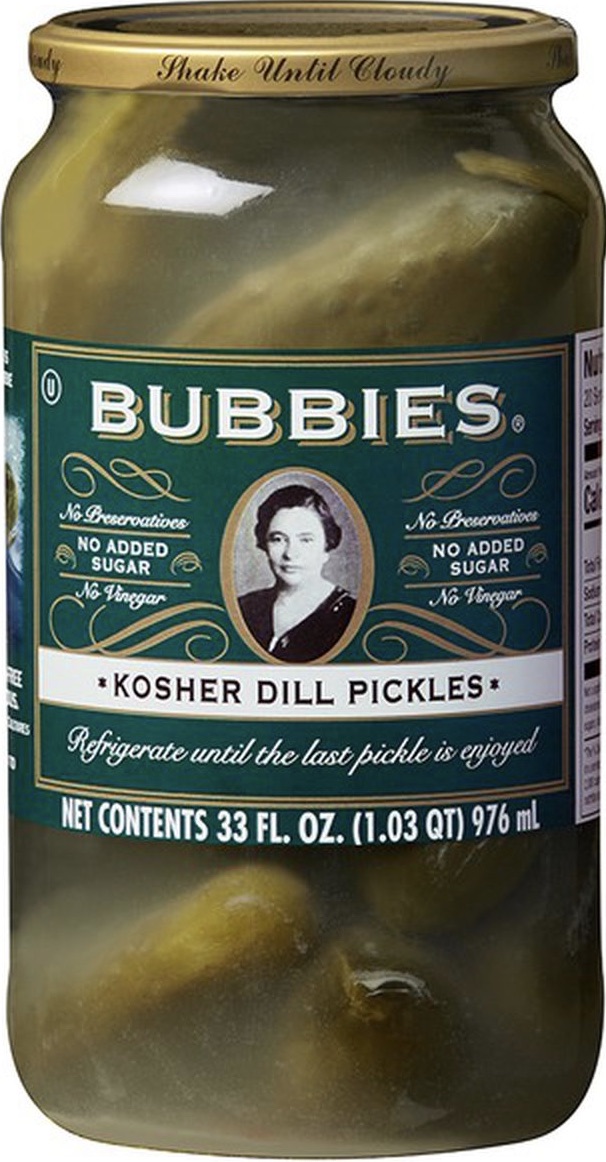 Leigh Truex started Bubbies in 1982 as a hobby on the side after her family friends suggested she sell her homemade pickles commercially. While her pickles were a hit taste wise, she unfortunately didn’t have the same luck financially. Then entered John and Kathy Gray, a couple who met working together at a bank and wanting to go into business for themselves. They Grays bought Bubbies in 1989, working to make it a well known brand in stores nationwide. A big part of their success has been focusing on the marketing, such as changing their labeling to include a photo of the perfect Bubbie (aka the kind and passionate Jewish grandmother). Sadly Kathy Gray passed away in 2011, but her legacy is remembered every day by the people at the company. 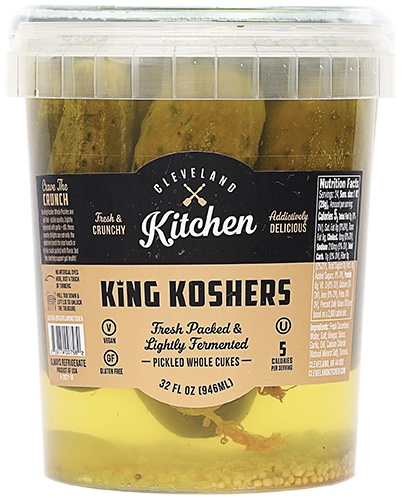 Cleveland Kitchen began as Cleveland Kraut. Three brothers from Cleveland wanted to share their love of European and Asian ferments to Americans. They first sold their sauerkraut at local farmers markets and eventually made their way into supermarkets nationwide. From the beginning, they were committed to sustainability. Having worked with local farmers through their mother’s nonprofit organization, North Union Farmers Market, the Cleveland Kitchen products source ingredients locally from Midwest farmers. Since becoming Cleveland Kitchen, the brothers have expanded into other ferments, including pickles. Their pickles are fermented and with vinegar added afterwards. The types of pickles Cleveland Kitchen has are whole king koshers, dilly garlic pickle spears, dilly garlic pickles chips, and bread and butta pickle chips. 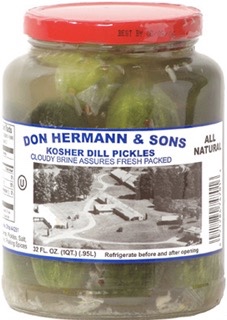 The Hermann family are descendants of Hungarian Jewish immigrants and have been making dill pickles in northeast Ohio since 1967. Their father was a chicken farmer until an infectious disease killed his flock. His family and friends then encouraged him to sell his homemade pickles. In addition to the Don Hermann & Sons brand being sold at supermarkets, they also make custom label pickles for other brands. The legendary New York hot dog chain Nathan’s Famous puts their name on the Hermann’s pickles sold in supermarkets across the country. Additionally, Don Hermann’s pickles are found at many restaurants around Ohio. 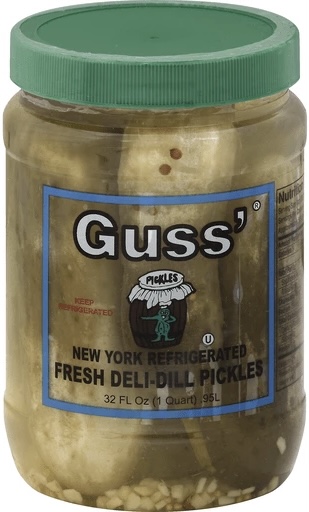 Izzy Guss emigrated to the United States from Europe over 100 years ago. He settled in the Lower East Side of New York City and set up a pickle stand at a young age. Izzy brought over recipes which had been used for generations in his old country. He sold the pickles straight from the barrels. Through several generations, Guss’ Pickles continued to grow. The pickles can now be purchased in supermarkets, by mail order, and at a number of gourmet pickle shops throughout the country. Guss’ has sour pickles, half sour pickles, kosher dills, and hot & spicy chips along with sour tomatoes and sauerkraut. 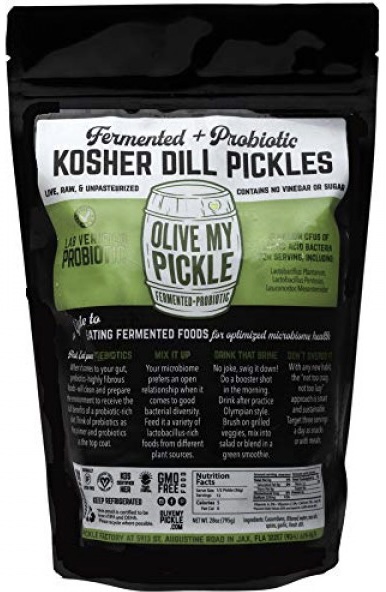 When Shai and Charlotte Tzbari began selling their Olive My Pickle products at farmers markets in Florida ten years ago, not many people were aware of the importance of gut health and the benefits of real fermented food. So The Tzbari’s were on a mission to inform the masses about how fermented foods are important for healing the gut. A decade later, knowledge of gut health has grown and Olive My Pickle has built a community of people interested in probiotic pickles. They have over 35 different kinds of products in the categories of pickles, sauerkraut, kimchi, olives, vegetables, and brine. The pickle options for Olive My Pickle consist of kosher dill, spicy kosher dill, garlic, and onion. 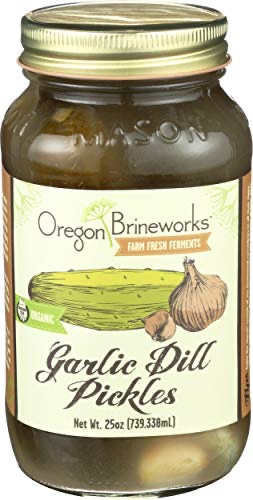 Oregon Brineworks comes from Brian and Connie Shaw, who met while running an organic farm. The two connected as they found they had the same passions for produce, farming, and the great outdoors. They then decided to start a fermentation business as a way to create delicious and healthy foods using produce from organic farmers in their region. Brian and Connie felt Oregon Brineworks would also be a great source for more healthy local food available all year round. 90% of their ingredients come from farmers in a 100 mile radius. The farms that they work with are all listed on their website. They make garlic dill and spicy dill pickles, which are both organic. 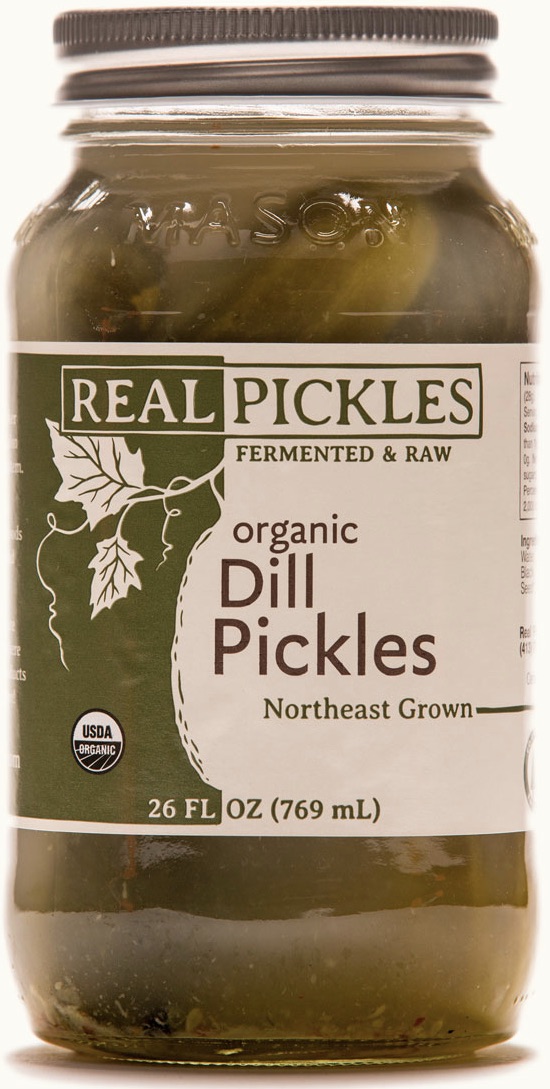 After attending a workshop at the Northeast Organic Farming Association Conference in 1999, Real Pickles founder Dan Rosenberg began making traditional pickles. After a couple years of practicing his new craft, he decided to start a small company devoted to local, regional, and organic foods. In 2001, he started pickling cucumbers and selling them to a dozen local stores. In 2009, the company had steadily grown as they added other fermented foods. Dan then saw it as time to move out of the incubator kitchen and get his own property. He bought a century-old industrial building in Greenfield, MA and retrofitted it into a solar-powered, energy facility. n 2013, Dan continued his commitment of balancing purpose and profit by making Real Pickles a worker co-operative. Real Pickles offers the varieties of dill, garlic dill, and spicy dill.  All of the farmers they use can be found on their web page. Dan also cites the studies of Dr. Weston A. Price as an influence on him becoming interested in locally grown foods. 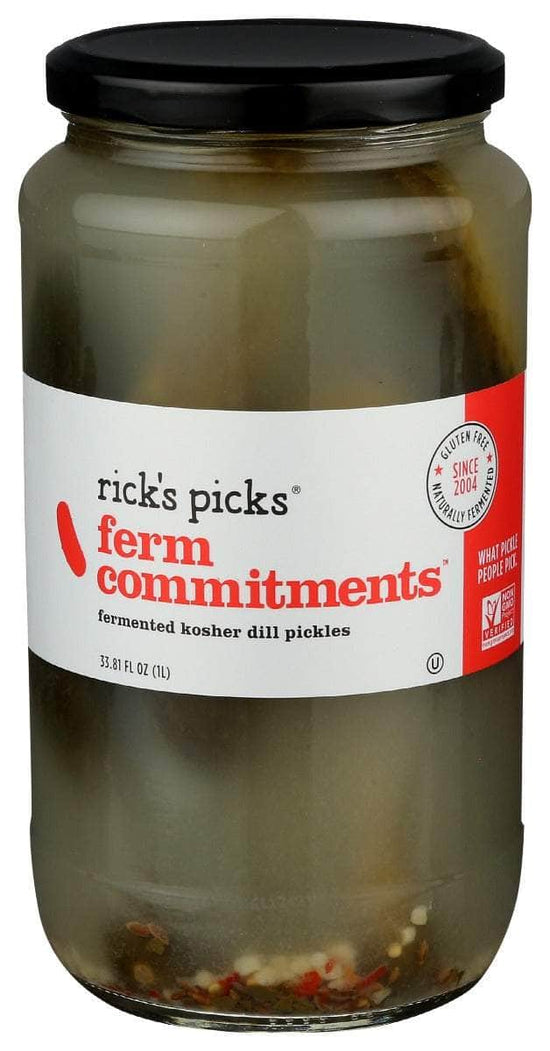 Rick Field grew up making pickles in the summer with his mother and father. Rick enjoyed making the pickles as much as he enjoyed eating them. The pleasure of making pickles stuck with him, so he decided to renew that passion over 15 years ago in his one bedroom apartment in Brooklyn using produce from a local farmers market. In 2004, he switched from working as a television producer to founding Rick’s Picks. Over the next several years, Rick was able to turn his hand packed, all natural pickles into a national brand. In the past year, he launched the ferm commitments pickles, which are his first naturally fermented pickles. 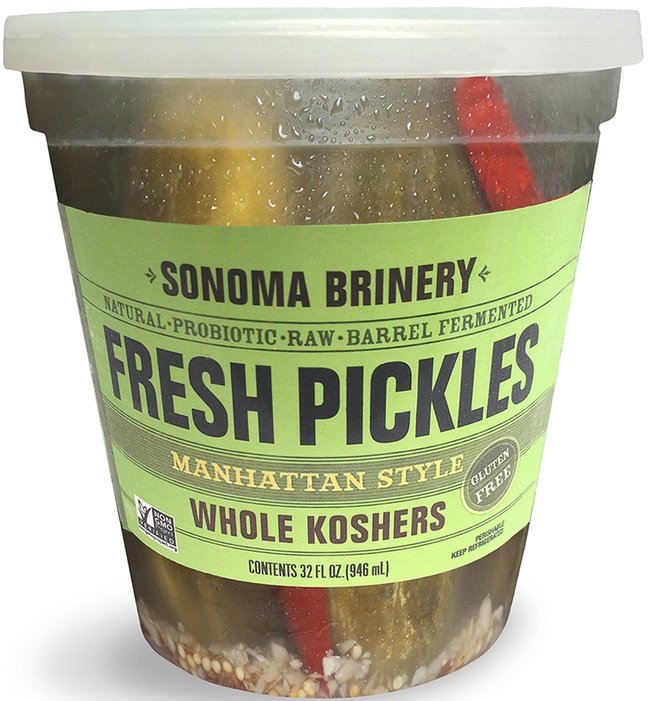 In 2004, Dave Ehreth picked some cucumbers out of his garden at home in order to make salt-cured kosher pickles similar to the ones found in New York delis. His pickles received such wild enthusiasm that Sonoma Brinery was born. Dave sees his pickles as an homage to the traditional kosher pickles which were fermented in salt brine with garlic and spicing. He found too many pickles being labeled as kosher, but being made with vinegar, artificial colors, flavorings, heat processing and preservatives. So he wanted to bring some on the market which did it the old fashioned way the Jewish communities around New York did it. Sonoma Briney is based in Healdsburg, CA and has always been a family business.