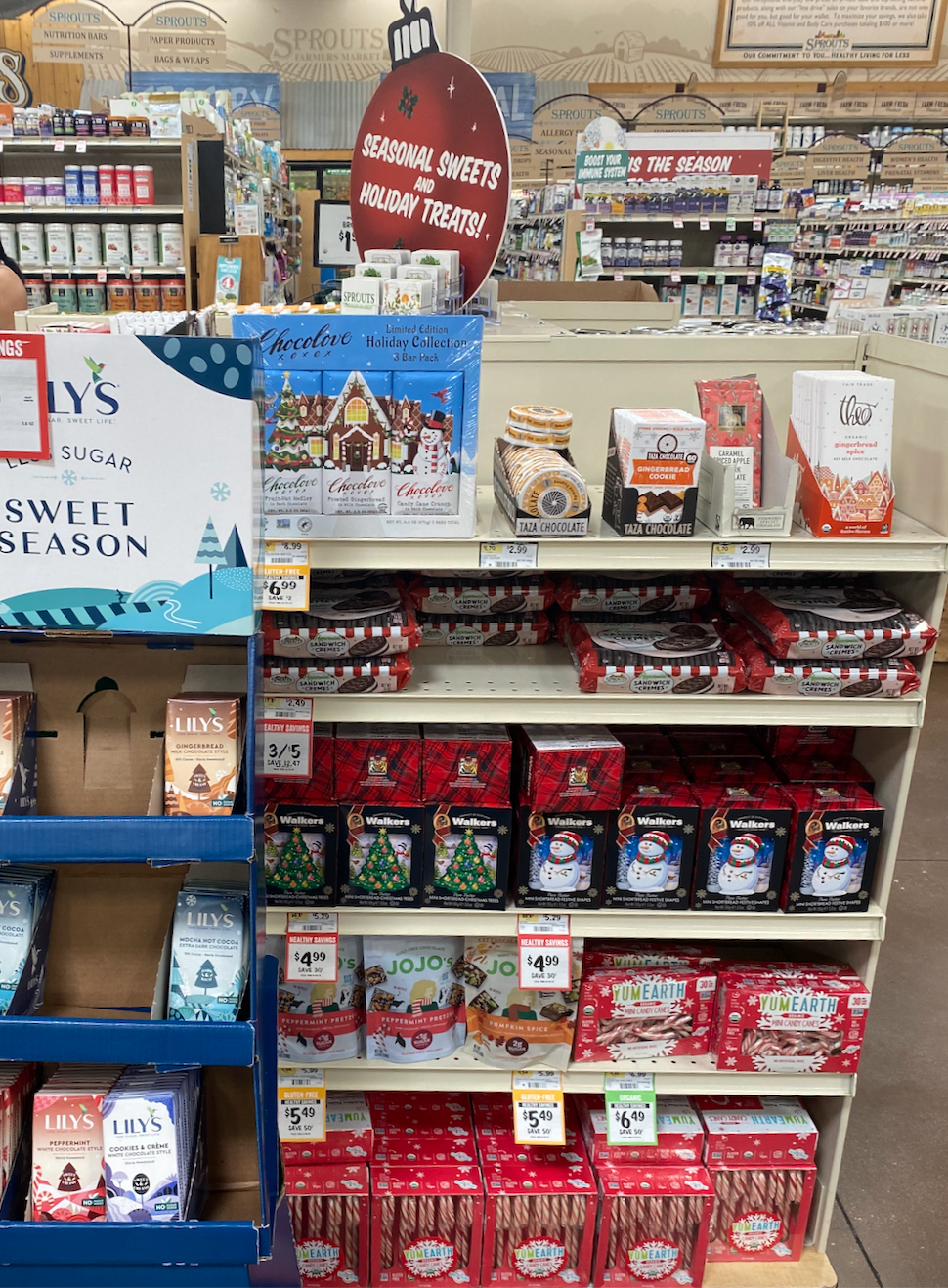 It’s December and the holidays will be happening before we know it. As part of the tradition, many will partake in eating lots of candy. The winter holidays are third in terms of candy sales, only behind Halloween and Valentine’s Day. When it comes to eating candy, it’s important to choose organic and sustainably sourced confections.

Organic candies contain cane sugar instead of GMO sugar or high fructose corn syrup.  They also use natural ingredients for color and flavors, natural waxes, and more heat stable oils. Plus being certified organic means it has non-GMO ingredients which weren’t sprayed with any pesticides such as glyphosate. Additionally, the organic candy companies source their ingredients from farms where the workers are treated fairly and paid a fair price for their work.

In terms of holiday candies, I searched all of the organic candy businesses to see who had products which were holiday related in one way or another. One element I was looking for was ingredients associated with winter time, such as peppermint or  gingerbread. Another type of candy which could make my list is winter season or holiday related shapes, such as a snowman, a Christmas tree, or coins known as Hanukkah gelt. And of course, what would the holidays be without candy canes?

In alphabetical order, here are the 12 best organic candies you can buy for the holidays:

Third generation German-Jewish soapmaker Emanuel Bronner Known formed Dr. Bronner’s in 1948 with his liquid peppermint soap and health food seasonings. The soaps and seasonings both contained a label which said “We are All-One or None!” Over 70 years later, Dr. Bronner’s remains a family-owned business and continues with its founders vision of selling high quality socially and environmentally responsible products as well as donating their profits to various social and environmental causes. They make a wide variety of hygiene items, including soaps, hand sanitizers, tooth pastes, and balms. In the recent years, they’ve expanded into regeneratively grown foods. In 2018, along with The Rodale Institute and Patagonia, they co-founded the Regenerative Organic Alliance to certify products as regenerative organic. Dr. Bronner’s has the first Regenerative Organic Certified coconut oil. And most recently, they launched a line of regenerative dark chocolate bars in multiple flavors. For the holidays, Dr. Bronner’s introduces the cool peppermint cream chocolate bar. 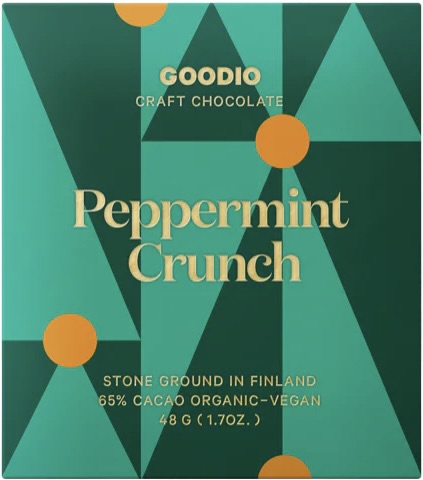 While working as game developer at Rovio, the company best known for Angry Birds, Goodio founder Jukka Peltola was looking at ways to eat healthier. As he tried to find alternatives to sugary and salty snacks, he added raw cacao to his diet and removed dairy. By consuming it raw, the cacao remained all of its nutrients. This resulted in him feeling livelier, lighter, and more energetic. After telling his friends, family, and colleagues about his new diet and lifestyle, they wanted to build a company which value purpose over profit. The cacao is sourced from farms in South America and Africa. It’s then stone ground in Helsinki, where Goodio is based. They have regular chocolate bars and bars with oats known as ChocOat bars. Goodio’s holiday provision are the peppermint crunch, ginger bread, caramelized rosemary, and winter glow chocolate bars.

Hammond’s Candies dates back over 100 years ago when founder Carl T. Hammond Sr. opened Hammond’s Candy Factory in Denver, CO. Carl started it as a small family business committed to quality. The first candy he created was Carl’s Honey Ko Kos, which were chocolates topped with shredded coconut. What began as a one man business soon developed into Carl hiring a manager to run the store while he traveled throughout the west selling candy to other retailers. Several generations of the Hammond family ran the company from Carl’s son Carl T. Hammond Jr. to Carl Jr.’s son-in-law Emery Dorsey. In 1995, Williams-Sonoma purchased a number of their products and Hammond’s became a national name. The company was sold in 1999 to three veterans of the candy industry who expand Hammond’s from a small business to 10 employees to a factory twice as large with over 60 employees. In 2007, candy lover Andrew Schuman purchased Hammond’s. Having a similar background in retail and enthusiasm for entrepreneurship as Carl T. Hammond Sr., Andrew eventually expanded the company to 300 employees and into the snack foods arena. For the holidays, their organic options include candy canes of various flavors, mint pillows, and mint mini ribbons.

The story of Hu Kitchen begins with the three founders, Jordan Brown, Jason Karp, and Jessica Karp, all wanting to improve their health. Jordan did extensive reading on health and wellness. Jason had successfully overcome autoimmune disease himself. Jordan left the corporate world to devote himself full time to nutrition and food. The three researched the gut-brain connection, what causes inflammation, and the effects of foods and additives have on our health, immunity, and performance. They concluded processed ingredients needed to be replaced with basic and healthier alternatives. And the food brand of Hu Kitchen was born. They now offer different flavored chocolate bars, chocolate covered fruits and nuts, and chocolate gems. Hu has a holiday-themed chocolate bars in the flavors of gingerbread, crunchy mint, hazelnut butter, and pumpkin spice.

Lake Champlain founder Jim Lampman bought fancy chocolates every year as holiday presents for his Ice House Restaurant staff in Burlington, VT.  One year, his pastry chef said the chocolates Jim bought weren’t all that great, so Jim dared him to make better ones. His chef took him up on the challenge and the two started making hand-rolled creamy truffles together. Today, Lake Champlain has a wide variety of chocolates which are all fair trade certified and GMO free. Many of their products are also certified organic. They remain a multi-generational family business which sources from local and sustainable partners. Lake Champlain has a wide variety of organic holiday candies with everything from Hanukkah gelt to peppermint cream dark chocolate jubilees to chocolate snowmen and Santas. 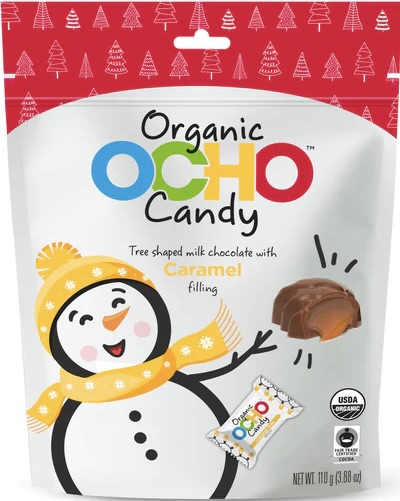 Natural food expert Denis Ring thought we’d soon see an organic candy bar hit the market. But he waited year after year without seeing this happen. So he eventually felt it was time to create one himself. Denis tried several different concepts and had his friend entrepreneur Scott Kucerik taste. As it only took one bite for Scott to be won over, Denis asked him to join OCHO Candy. Their holiday contributions are milk chocolate tree-shaped candies filled with caramel or peanut butter and peppermint-filled dark chocolates.

Raaka Chocolate prides itself on transparent trade. They purchase cacao directly from cooperatives and grower organizations who value quality, sustainability, field support, market access, and premium prices for farmers. They always purchase cacao premium prices which are higher than the commodity market and fair trade prices,  in addition to making sure the prices will remain stable. Every transaction of Raaka makes can be found on their website. For the holidays, they offer the chocolate bars ginger snap, candy cane crunch, and winter spice. 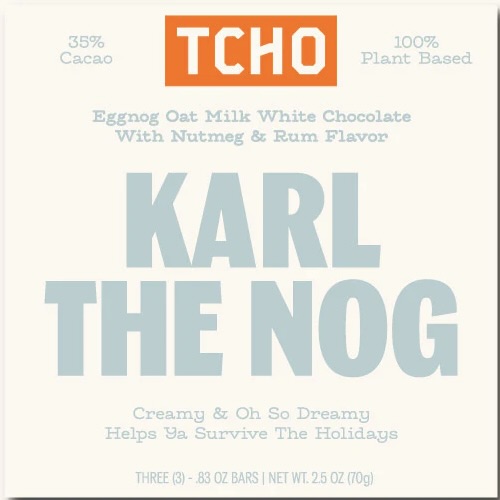 The name TCHO is the phonetic spelling of the first syllable of chocolate. The company originated with the mission to both produce the best chocolate and produce it in a way which makes the world a better place. All of their ingredients are sourced with methods to benefit the farms and taste delicious. TCHO looks for farms around the world which treat their growers fairly, source ethically, and reduce their carbon emissions. They created an in-house program called TCHOSource, which partners with cacao farmers, cooperatives, and research organizations in cacao producing countries in order to get the best cacao beans. TCHO’s newest product is Karl the Nog, an eggnog oat white chocolate flavored with nutmeg and rum.

Theo Chocolate was created in 2005 by Joe Whinney and Jeff Fairhall. Joe had previously formed the first company to manufacture and supply organic cocoa and chocolate products in bulk to the U.S. food industry. Jeff was one of the founders of  The Essential Baking Company. Joe & Jeff’s goal with Theo was to make high quality chocolate from scratch from the cocoa bean to the chocolate. Their practices also include using third parties to verify that everybody they work with is being truthful in their claims, negotiating stable prices with their farm partners, and having full transparency with everybody they work and trade with. Theo makes six different holiday-themed chocolate bars in the flavors of peppermint crunch, nutcracker brittle, gingerbread spice, egg nog white chocolate, milk & cookies, and peppermint mocha. 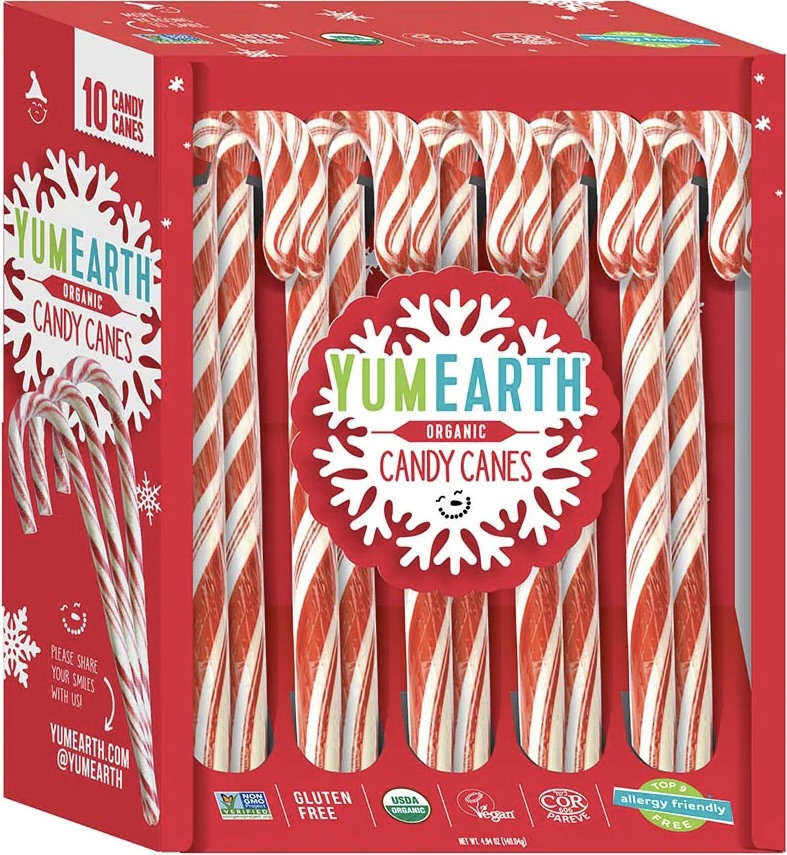 Two young men had been living organic lifestyles. After both becoming fathers, they felt it was time to start an organic candy business. YumEarth began with lollipops and then expanded to hard candy, gummy bears, gummy worms, jelly beans, and licorice. Their holiday candies include candy canes, mini candy canes, and candy pops.

The origins of Zazubean start with a group of women on a bike trip at an island off the coast of British Columbia. Coincidentally, everybody in the group brought their favorite chocolate to keep their energy up as they pedaled along on the journey. All of the women then delved into a conversation about quality chocolate with the question of whether chocolate could follow ethical standards and be both healthy and tasty. After returning home, Zazubean co-founder Tiziana Ienna began concocting high quality chocolate with super powered ingredients. As her background was as a physiologist, she wanted to develop nutritionally dense recipes which promote a balance lifestyle. Co-founder Tara Gilbert soon joined Tiziana and brought her passion for social justice and sustainable business practices along to Zazubean. The two working together led to creating fair trade chocolate bars which are good for the environment, the chocolate growers, and people’s health. Zazubean’s holiday chocolate bars share the names of Santa’s reindeer Blitzen, Vixen, Dancer, Prancer, and Dasher.