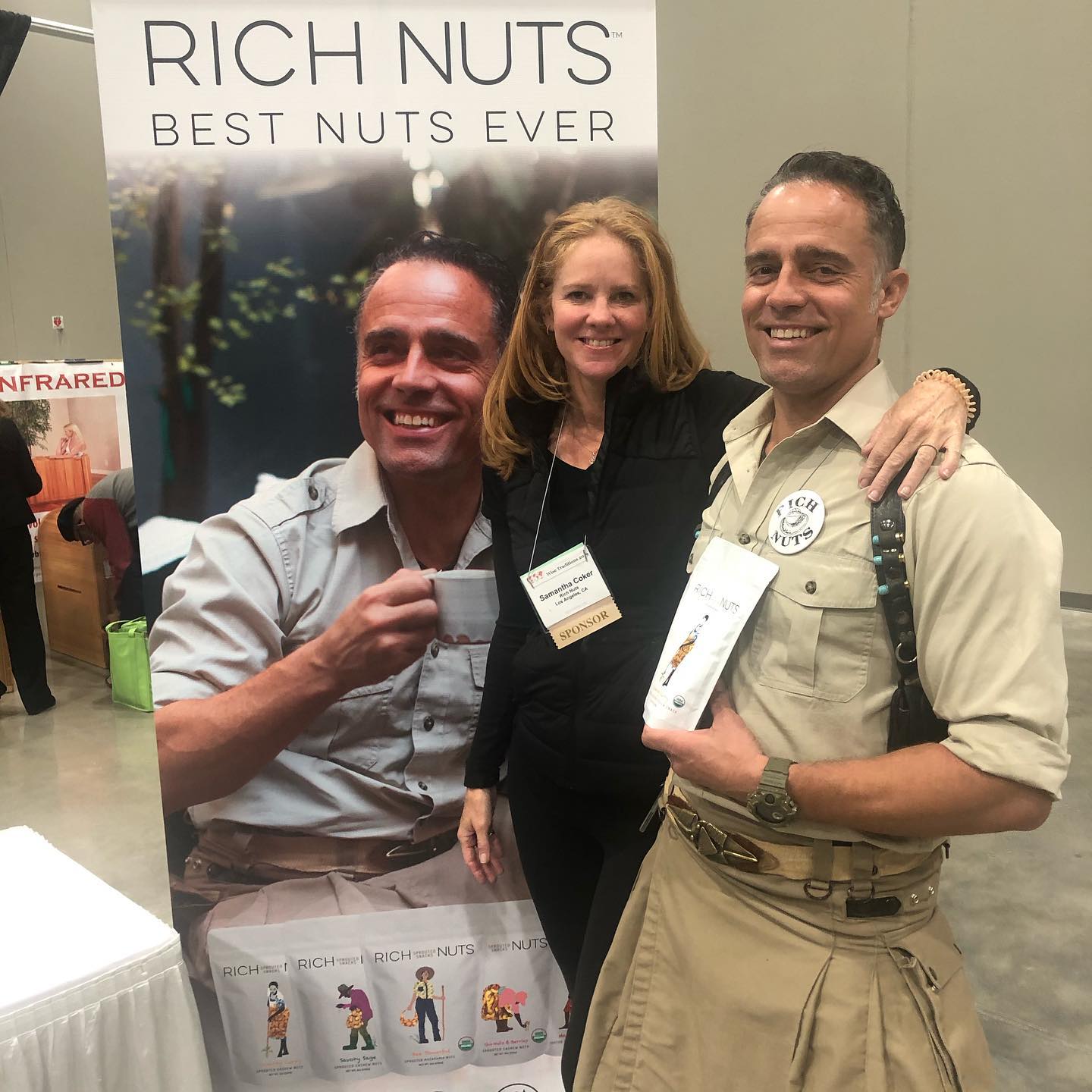 October 22 is National Nut Day. The day was started by Liberation Foods back in 2016 to advocate for fair trade nuts and encourage a healthy diet.

Nuts are considered an excellent source of food by virtually every type of diet and lifestyle from ancestral health to plant based diets to even conventional nutrition. But what many miss is the importance of sprouting nuts. Nuts are high in phytates and lectin, anti-nutrients which make it hard to absorb all of the proteins, essential fats, enzymes, minerals, and vitamins.

Along with choosing sprouted nuts, it’s also important to go with organic nuts. Multiple chemicals are often sprayed on nut trees. Even though the shells of the nuts offer some protection, pesticides and fungicides are used on nuts when they’re being picked and shelled. Additionally, the pesticides applied to the trees harm the bees.

In alphabetical order, here are the 10 best organic sprouted nuts: 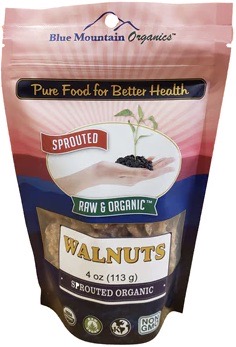 Blue Mountain Organics offers organic raw and sprouted nuts, nut butters, flours, grains, dried fruits, and other nutrient dense foods. They’re based out of the Blue Ridge Mountains in the agricultural community of Floyd, VA. They sell raw, organic, and sprouted foods as they’re for healing both the body and the planet. Blue Mountain has five unique products lines: Better Than Roasted, The Raw Bakery, Love Raw Foods, Flour of Life and Earth Chips. Their organic sprouted nuts fall under Better Than Roasted and come in the wide variety of almonds, walnuts, pecans, hazelnuts, cashews, Brazil nuts, and pine nuts. 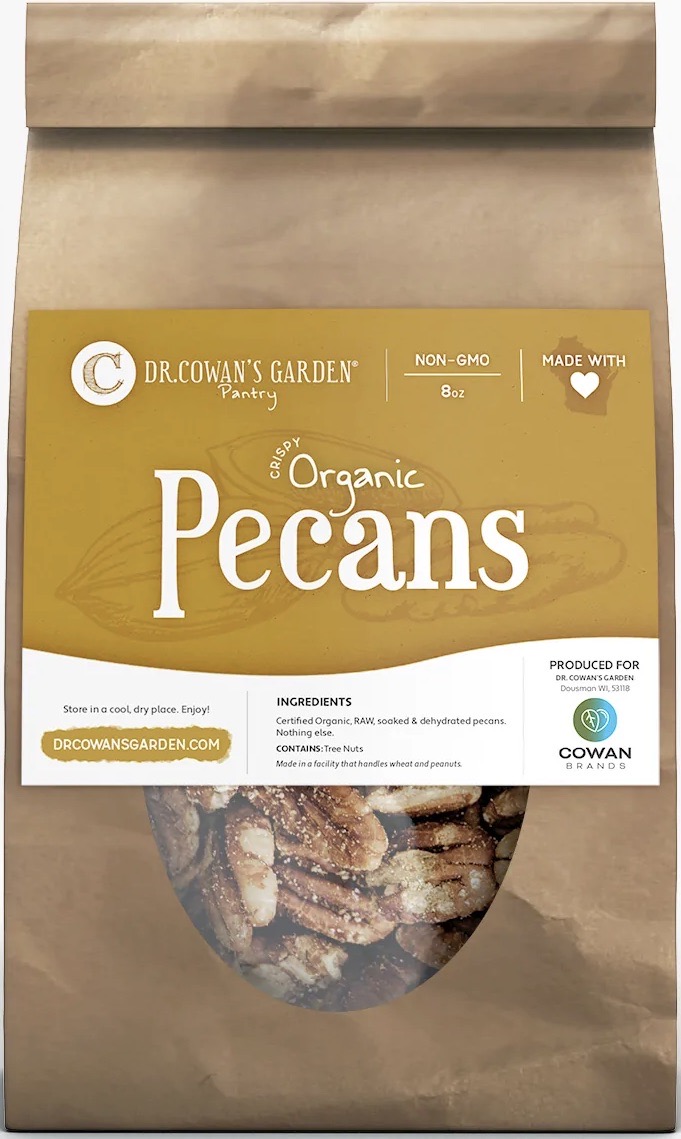 Alternative medicine doctor Thomas Cowan founded Dr. Cowan’s Garden along with his sons and Asher and Joe with the mission to “improve human, ecological, and economic health by increasing the cultivation and consumption of plant diversity”. Dr. Cowan observed how healthy, traditional people ate at least 10-12 different plants a day, but currently even a person with a large garden has found it hard to eat five plants a day. So he launched Dr. Cowan’s Garden powders to aid this problem. Since then, his company moved into providing other nourishing products, such as beef, poultry, and pork boxes from Joel Salatin’s Polyface Farms, pre-soaked granola, organic cold pressed oils, organic grains & legumes, and sprouted almonds & pecans. 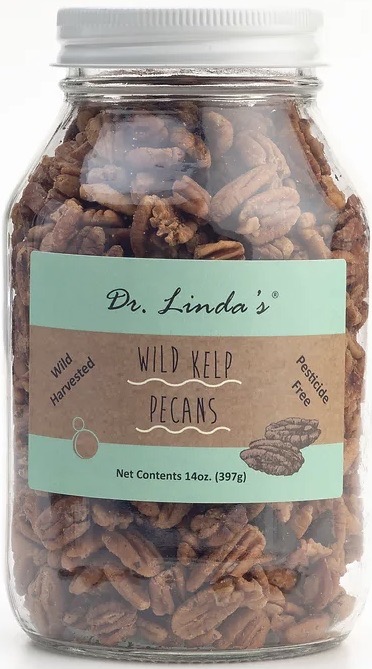 Dr. Linda Robins, M.D. went from being a fertility specialist to opening a homeopathy practice. Her transition into homeopathy occurred after she was unable to cure her chronic back pain ailment with traditional medicine. While being a homepath, Dr. Linda discovered how important food is in terms of health. So she started teaching her patients about the benefits of nutrient dense foods. Delving further, she learned about the key role which magnesium plays in our health and how the essential mineral is lacking in the current standard diet. In 2013, she decided it was time to integrate magnesium so it could found easier and created the Dr. Linda’s magnesium-rich product line. She began with offering nuts and seaweed sourced from sustainable and environmentally conscious farms. All of the nuts are mixed with kelp. 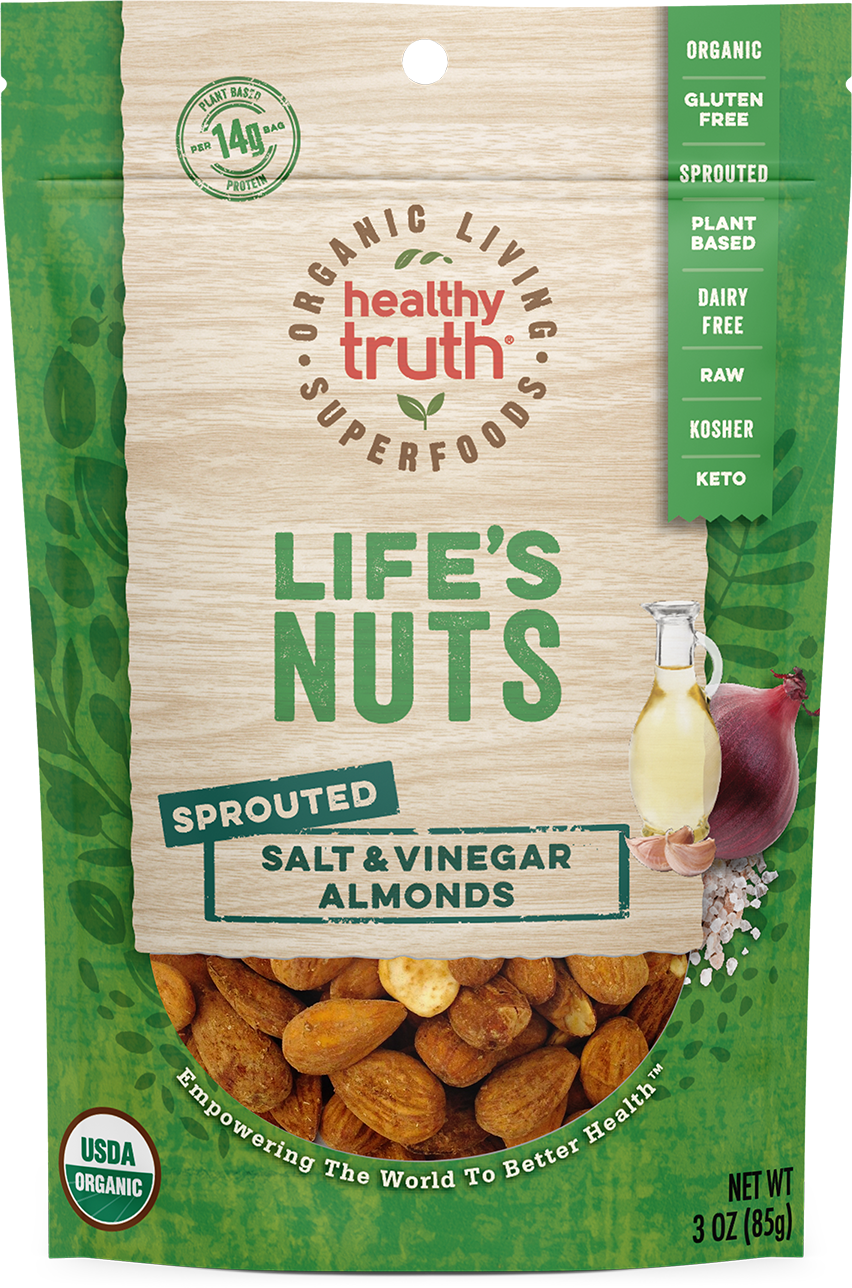 Healthy Truth  develops, manufactures, and distributes protein bars, powders blends, and sprouted nuts. Their products are all sourced from sustainable, organic, and fair trade vendors globally. Their sprouted nuts comin unique flavors, such as salt & vinegar, buffalo ranch, sour cream and chives, pizza, and coconut crust. Many of the flavors are a mixed combo of almonds and cashews. 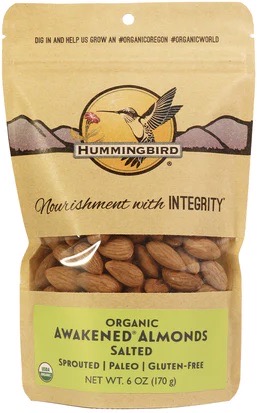 The origins of Hummingbird date back to 1972 when a honey shop called Honey Heaven opened in Eugene, OR. In 1981, Eugene Scott purchased the business and shifted the focus to wholesale. This was mainly due to the problem of the employees eating up the store’s products. In 2003, Eugene retired and sold the company to Charlie and Julie Tilt. The Tilt’s were able to get the company to grow to new heights and offer a larger array of products. At this time, the Tilt’s also felt they should change the company’s name. They chose the name Hummingbird due to its versatility of flying in all directions plus its gentleness of not harming the flower while it sipping the nectar. Hummingbird’s current products come in many diverse areas, including candy, condiments, flours, legumes, spices, sweeteners, and of course nuts. 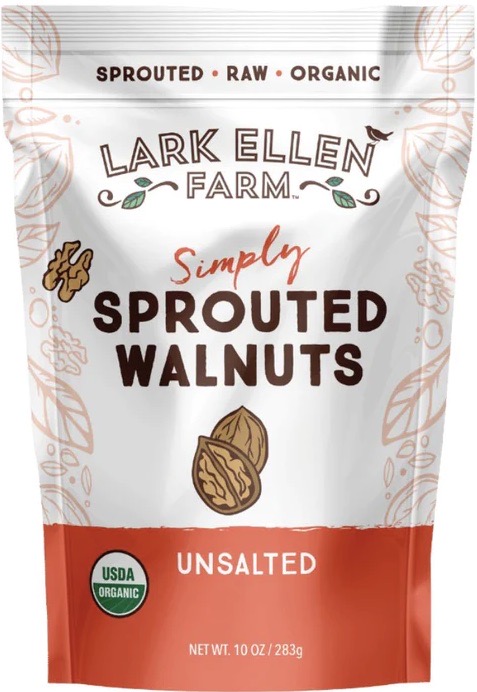 In Late 2014, Lark Ellen Farm founder Kelley D’Angelo made a commitment to go grain free for 30 days. She knew grains could cause inflammation and wanted to see if there would be a difference by eliminating them. The results where her digestion improved and her lifelong chronic pain was completely gone, but she missed her morning cereal. Kelley went back to her kitchen to experiment with different recipes with sprouted nuts and seeds. She began selling her sprouted breakfasts as Ojai Granola Girl with much success at the Ojai Farmer’s Market. She changed the name of the business later that year to Lark Ellen Farm and since expanded into supermarkets and online sales. Lark Ellen now has sprouted almonds, walnuts, and cashews along with pumpkin and sunflower seeds. 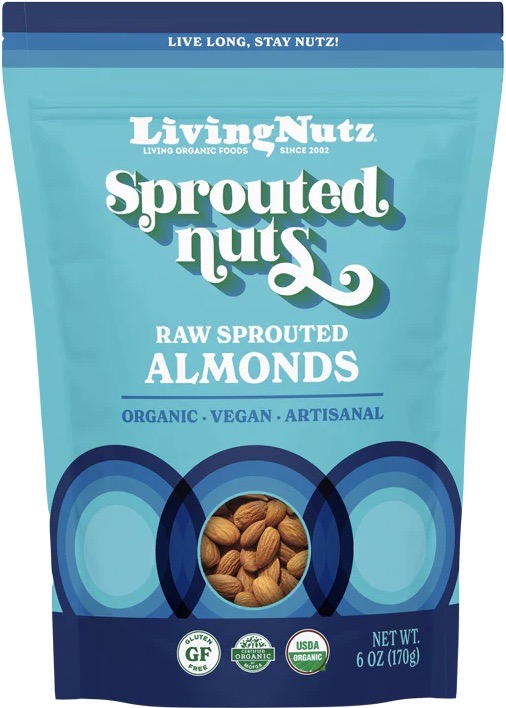 The story of Living Nutz begins with its founders attending a lecture in 2000 on the raw food diet. They were already into organic health foods and wanted learn how optimize their health even more. The lecture was life changing, giving them a new outlook on food and philosophy of life. The founders were currently running a company which produced lip balm from hemp seed oil. Having the eco-conscious business skills they learned from their first venture to their newfound excitement for raw food, they were ready to tackle another arena. Living Nutz was established in 2002 with the goal of making the best tasting Certified Organic raw food snacks. This is why they soaked and sprouted their nuts instead of roasting them. Pure Traditions comes from Wild Mountain Paleo Market founder Steve Tinsky. Wild Mountain Paleo is an online store which is able to sell healthy paleo foods to people wherever they are. In 2015, WMP was selling a local brand which had hot cereals, pancake and pizza crust mix, and an organ meat snack stick. The brand had to change their name due to a trademark issue, so WMP proposed to create their own brand and place these products under it while the other company focused on manufacturing the items. The other company agreed to it and Pure Traditions was born. Pure Traditions started with six products and added more and more over time. Some of the products they added are the multiple flavors of sprouted pili nuts and their sprouted almonds. 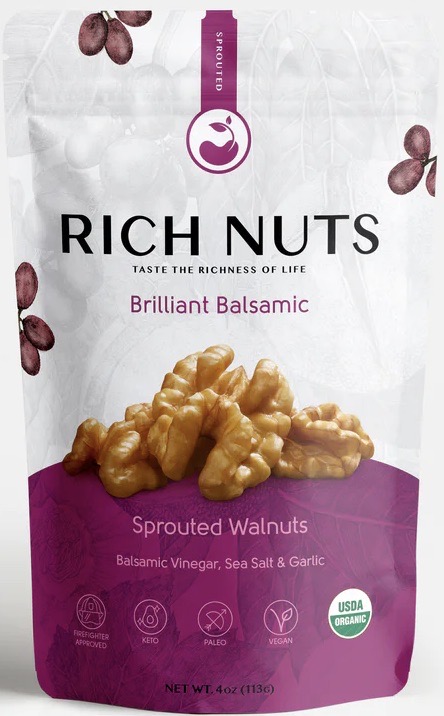 Rich Pauwels first learned about the benefits of sprouted nuts when he was working long shifts as a firefighter and paramedic during the California wildfires. Rich was worn out from hauling heavy equipment uphill. Looking at eating healthier for more endurance, he discovered the wonders of sprouting nuts. He soaked cashews, dehydrated them, added herbs from his garden, and shared all of this with his fellow firefighters. As Rich was having hard time simply meeting the demands at work, he knew he had a winning product on his hands. So Rich Nuts took off. His wife Samantha co-founded the business with him and became its CEO. Rich Nuts is a triple bottom line business where they’re mindful of the impact in everything from how they produce, package, ship the nuts along with treating everybody well who are part of the supply chain. 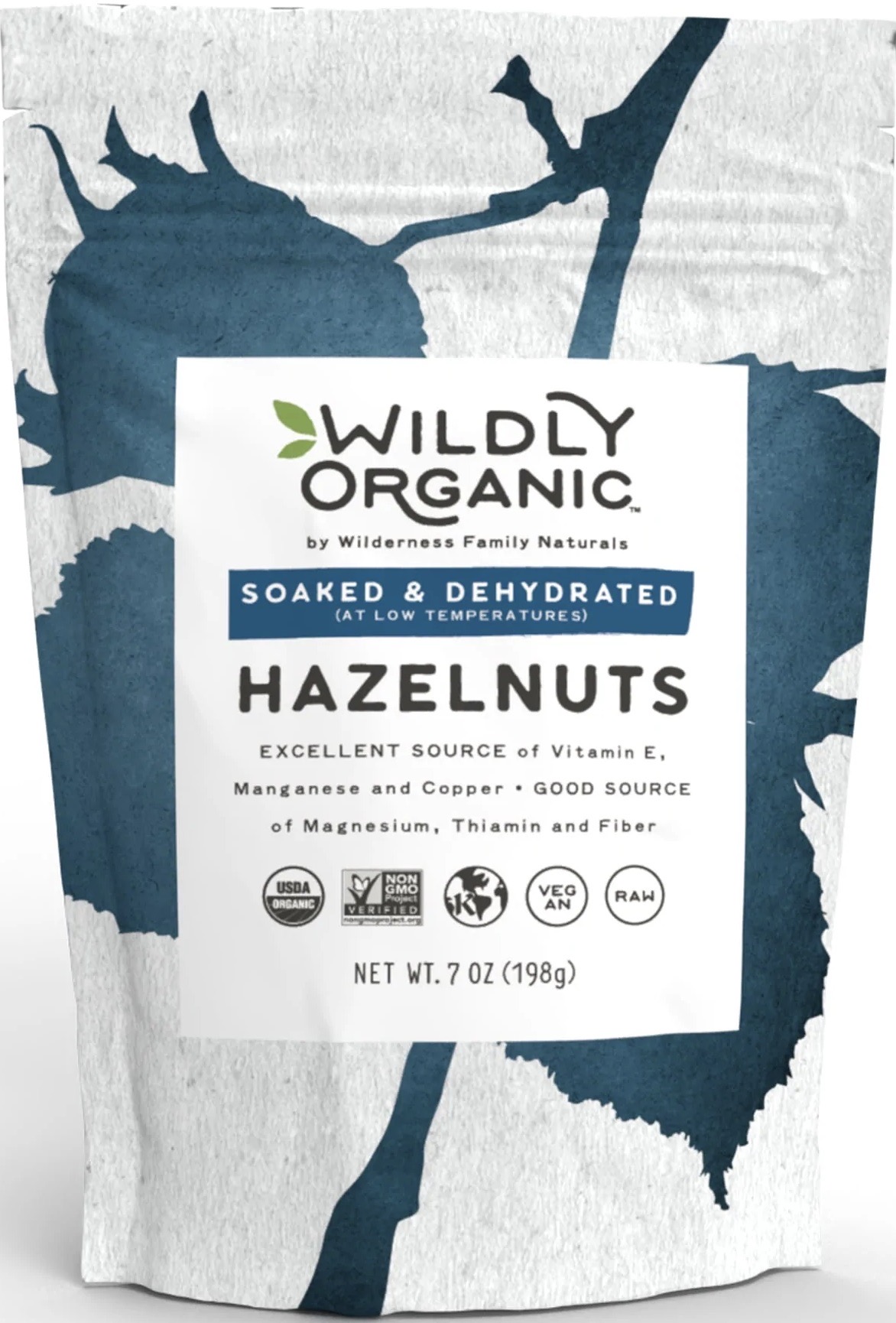 Wildly Organic was originally Wilderness Family Naturals. They began in 2000 with the founders moving into the wilderness in northern Minnesota in search of a better life. After learning about organic food and nutrition, they connected with farmers and suppliers who shared their values. At this point, they were operating the business of out of their solar powered home in the Northwoods. The company has grown and now has a great assortment of healthy foods from organic coconut oils to raw cacao to sprouted nuts. In addition to being USDA Organic, their partners confirm they don’t use any pesticides, herbicides, or chemicals and plant inspections are conducted annually.