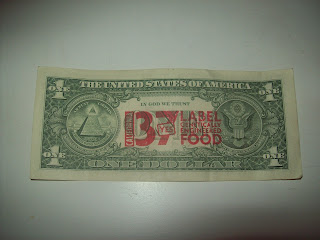 My father always told it’s important to hear what the other side thinks.  So I decided to take a look at what’s being preached by the campaign against the California Proposition 37 for mandatory GMO labeling.  With a blog called “The Appropriate Omnivore” and being a member of the Weston A. Price Foundation, it would be a snowy day in July that I’d be against Prop 37.  Looking at the No on Prop 37 website didn’t change my mind in the least.  Their arguments were filled with misleading, contradictory, and false information.  With the “No” campaign outspending Yes on Prop 37, it’s important to let people know why the ones behind No on 37 can’t be trusted.

Their first argument is that Prop 37 conflicts with science and says genetically modified foods are perfectly safe.  I’d like to see a long term study that proves this.  Oh wait!  There aren’t any.  However, there have been rat studies done that show their babies being smaller than normal and dying within three weeks.  There also have been studies with hamsters fed GMO soy and becoming sterile.

The No on 37 campagin also talks about how genetic engineering has been going on for the past 20 years.  Let’s take a look at what’s happened in this time.  GMO crops have required using more pesticides and we’re seeing more superweeds and superbugs.  The farm animals around these crops are becoming sterile, sick, and many are dying.  Also, more people are allergic to corn, soy, and cotton, all foods that are commonly genetically modified.

The opposition to Prop 37 says it bans GMOs unless they’re relabeled.  This is the most misleading and dangerous point that No on 37 is making.  There is nothing in the propostion that bans GMOs.  All it does require labeling.

The next argument No on 37 makes is that the proposition is filled with special interest loopholes and exemptions.  They bring up how meat, poultry, eggs and dairy from animals given GMO feed don’t have to be labeled.  The reason for this is the California Constitution doesn’t allow for ballot initiatives to cover multiple subjects.  The only way the proposition can be written is start with one covering first generation plants, animals, and insects that have their DNA genetically altered.  I’m one of the biggest advocates of eating pastured meat and dairy, meaning no genetically modified feed.  I’d like to see such second generation and products as meat and dairy that contain GMOs to be labeled too.

No on 37 also mentions that the initiative doesn’t require restaurants to mention use of genetically engineered foods.  Again, I want to see restaurants labeling GMO products they serve.  In fact, I’ve said that on my radio show multiple times.

Another claim No on 37 makes is that this will lead to lawsuits.  Huh?  I thought they were saying GMOs are perfectly safe.  So if there’s no health risks with genetically modified food, then why would people sue?  Or if they did, they couldn’t win with their lawsuits.  Or maybe it’s that No on 37 knows what GMOs really do and they’re afraid that now more people will know why they’re getting sick.

The last argument from No on Prop 37 is that the proposition will lead to higher food costs, because of the relabeling.  Got any statistics to back up that claim?  How much does it cost companies to change their labels.  Companies do this all the time.  Plus, the companies will be given 18 months to do this and it’s only a few words they have to add.

In the final No on 37 argument, it goes on to say if the companies don’t provide new labeling, they’ll be forced to use non-GMO products.  Again, some dangerous and misleading arguments being made.  Prop 37 neither bans GMOs nor forces companies to use organic, non-GMOs.  No freedom is being limited by the proposition.  However, with the way things are now, consumers don’t have the freedom to know if they’re buying GMOs.

One other thing I came across from looking at the No on Prop 37 website was all of their materials you could download.  On each piece was the information about who funded No on 37.  The first company listed under major funding was Monsanto, the leading producers of the genetically modified seeds.  The opposition to Prop 37 isn’t made up of scientists who disagree with GMO studies or regular people concerned with paying more for food.  No on Prop 37 is funded by the only people that will really suffer.  And Monsanto knows they’re in trouble if it passes.  If GMOs were truly safe like Monsanto says they are, then they wouldn’t be afraid of their products being labeled.

So tell me if you think any of No on Prop 37’s argument have any validity.  To learn more about the dangers of genetically modified food, I recommend watching the documentary Genetic Roulette.  And remember to vote yes on Proposition 37 at your polling place on November 6.

One comment to “Prop 37: The “No” Campaign Gets It So Wrong”